Small items from the previous week.

Florida Governor Ron DeSantis had a couple of winners this week; at least in terms of what he can do.  For legislation, he proposed a bill that will put teeth behind clamping down on riots - violent or disorderly displays, not "peaceful protests" - when they destroy property, and threaten lives. It stiffens penalties for many of the things we see rioters get away with in other states, and invokes RICO laws for anyone who organizes or funds a violent or disorderly assembly.

Outsiders might not know Florida has cities that are as blue as anywhere, and vast stretches of counties that are sane.  I think the proposed legislation might keep a riot in Ft. Lauderdale or Palm Beach from turning into the kind we're seeing in Seattle, Portland or Minneapolis.

The second thing he did was to authorize the state to move to phase 3 of Covid-19 recovery, lifting restrictions that kept restaurants and theme parks from going to full capacity and lots more.  He issued executive orders aimed at preventing localities from setting up the virus mask equivalent of speed traps, essentially fund-raising on mask mandates.  At $100/violation there are stories of city of Miami police waiting in grocery store parking lots, ticketing people who get out of the store and take their mask off before getting in their car to leave.  They've been said to have raised over $14,000, which ought to be easy at $100/pop.

Naturally, the response to the gov. is along strict party lines with most of the newspapers in the state opposing him and wanting to hide behind their placebo masks.  I heard him interviewed by someone (Laura Ingraham?)  the day he released this.  He said he had a panel of epidemiologists from around the country and they said the time for lock downs is over.  All they do is "flatten the curve", or "slow the spread" while creating their own damages that are harder to measure.

A word on Amy Coney Barrett.  From everything I can read about her she seems to be a stellar pick.  Even Noah Feldman, a Harvard Law Professor with nearly fatal levels of Trump Derangement Syndrome, endorses her.  One thing that strikes me as odd is the attacks she's getting for being Catholic when we hear Nancy Pelosi defending herself by declaring she's Catholic whenever it's convenient.  I believe both Biden and Knee Pads claim Catholicism.  It's like a wink and a nod saying, "we're Catholic, but only only Sunday and only during mass, every other hour of the week we're as secular as Karl Marx."  It's as if people are allowed to have beliefs, but only if they're like a coat: put them on to go to church, take them off as soon as you're out.

But Judge Barrett herself had a wonderful answer to this, reported by PJ Media.

“I think when you step back and you think about the debate about whether someone’s religion has any bearing on their fitness for office, it seems to me that the premise of the question is that people of faith would have a uniquely difficult time separating out their moral commitments from their obligation to apply the law. And I think people of faith should reject that premise,” she added.

Long time readers will remember me pounding on then chair of the Federal Reserve Ben Bernanke (the Bernank, among other names); his successor Janet Yellen, and more pretty regularly.  (Yo, Fed Heads - if I missed you it wasn't because you were good, it's because something else caught my attention).  I found this cartoon on Pinterest showing how the most secret part of the Fed works. 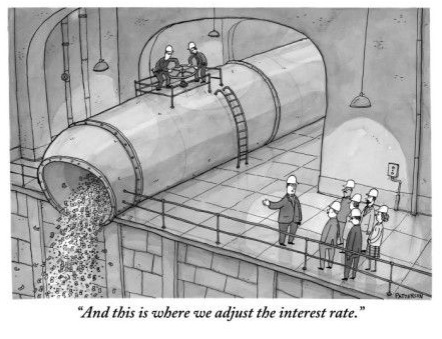 As always, found on Pinterest, the Great Sargasso Sea of the internet.  If it's yours and don't want it here, let me know.