Two Cents on the Debate

I seriously doubt I'll watch the debate tomorrow night.  These aren't debates, they're press events.  A moderator asks some questions and the candidates recite their platform.  Sometimes they throw a barb at each other.  Whoop-ti-do.  These things have been very over-rated (IMO) ever since the Nixon-Kennedy debate in 1960.  Very few are as big as that one was.  Early in the life of this blog, I summed up my feelings about day-to-day politics this way:

Preparing for an election is like cleaning out the litter box.  It's a disgusting, revolting task that exposes you to all sorts of dirty, filthy things you'd rather never see, but if you don't do it, the job gets even more disgusting and revolting.

My two cents is that the right has so thoroughly and dramatically lowered the bar for Biden that all he has to do is not obviously soil himself and it'll be his win to the media.   He just needs to stay mostly coherent for the duration.

I've seen and smiled at the memes as much as anyone, like this meme from 90 Miles From Tyranny: 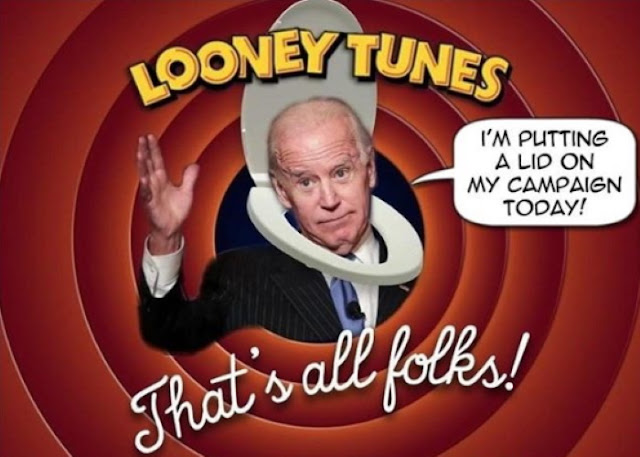 His campaign office has put a lid on stopped taking calls or letting him talk after mid-morning.  People make references to him displaying Sundowner's syndrome, a recognized symptom in certain types of dementia that cause patients to lose coherence in the evening.  This is just lowering expectations; lowering the bar.  He's a doddering old senile fool, we expect him to start talking about Corn Pop or the hair on his legs.

Has anybody been considering that maybe they're shifting his body clock so that he's at his best at night?  Have him sleep all day, get up at 7PM and prepare for the debate, knowing that to his body clock this is the best time of day.  At the worst, that change takes one day per time zone, but I'm sure age and general health affect that.  I've flown 8 time zones away and was doing fine the next day.  How long have they been shutting down in the morning?  A week?  12 days, so that he gets up at 6 or 7 PM instead of 6 or 7 AM?  Practically, if someone is shut off from all external cues, like seeing the sun, they can live by any arbitrary clock, so all his handlers need to do is keep him indoors with no windows and get compliance to the clock.  They do this for everyone working on a submarine, after all.  It's not "cruel and unusual."  With no external cues, you go to bed when you're told and wake up when you're told.  It doesn't matter what the time of day really is somewhere outside.

Last week, Bayou Renaissance Man ran a post positing that Biden's campaign was Elder Abuse and that “we” shouldn't stand for it.  Peter, should you happen to be reading this, recognize that the one pushing Joe Biden isn't just the Democrat establishment, it's his wife, Dr. Jill Biden.  She's pushing him because she's wanted to be first lady, and the power behind the throne, for ages.  People are betting who replaces Joe when he obviously can't do the job.  Kamala?  Mooch Obama?  Don't overlook Dr. Jill re-enacting how Woodrow Wilson's wife Edith took over the country.