About That Other Topic Sucking Up My Attention

In a comment to my post about concealed carry insurance, John Galt posted this link to a graphic created over at Sniper Country that compared most of the plans.  I used that graphic as the starting point for my own spreadsheet, which was not done in as pretty a format as Sniper Country's.  I checked as much data as I could on their graphic because it was dated December of '19 and I wanted to make sure it was still accurate.  Then I expanded their graphic.  That was because they only listed one option from the providers that had several tiers of coverage to choose from.  In all cases, it was the company's top of the line (most expensive but highest benefits) coverage.  It didn't take too long for me to realize that it would be a ton of work to list every option from every seller.  On top of that, not every provider lists their coverages in a straightforward way that makes it feasible to get the information I want.

Without further setup, let me show you a screen capture of the full spreadsheet; click it to embiggen it: 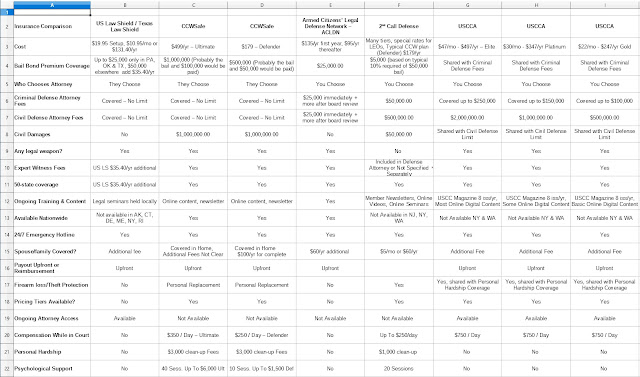 This is a 1568x924 sized jpeg so hopefully legible to everyone interested. I've expanded the original four columns to eight, adding a second column for a lower level service at CCWSafe, a column for 2nd Call Defense and two columns for USCCA, expanding it from one to three.

Interpreting legalese and advertising isn't the most straightforward thing in the world, but I tried.

There were questions that I simply can't answer.  The very first question, by BladeRunner1066 was:

Is this "insurance" listed with your state insurance commissioner? Do you have a legally enforceable contract?

I believe the only company in this list that's an insurance company is 2nd Call Defense, although the USCCA might be insurance as well.  The others are agreements for law services.  They seem to work (extrapolating off the end my data, so beware!) much like cost sharing services that have sprung up for medical costs.  They pool the monies they get in fees for membership and whatever else, then use that to pay for the services.  The companies all have lists of excluded states they can't operate in.  That question is probably closer to the bottom of the ones I'll ask.

All I can tell you is what I've read.  As I always I say, I'm not a lawyer, I'm some dood with a blog.  I saw nobody bragging about covering Zimmerman and I'd think the other cases are too new to be in their ads.  If I'm remembering properly, Zimmerman was acting as some sort of unofficial guard (that is, not a "real," licensed, bonded, private security company) in his community and that has got to change the odds of his having an armed encounter.  I can't imagine workers in a security company would have the same insurance and pay the same rates as armed civilians.

My impression, because this is the way the companies seem to talk, is that their model is the one on one interaction where someone is on their property in some way (house, car, yard, you name it) and another person or persons tries armed robbery, armed home invasion, something like that.  Those are relatively straightforward classic self defense cases.  It seems to me that anything going on in these riots has to be pushing the boundaries of what any of our insurance plans pay for, from homeowner's to car insurance to anything.