They seem to be a largely UK organization, but I bet most people have heard of the group Extinction Rebellion.  They're probably best known for a comically bad attempt to spray fake blood (beet juice) all over the Treasury building in Westminster.  Because reasons, I suppose.  Another protest was so bad the people they need for allies, everyday working people, took matters into their own hands.  The group was blocking The Tube, the rail system people use to commute to work, and commuters dragged protesters from the roof of an underground train so they could get on with their days.  The stories are some of the commuters beat the crap out of the protesters. Way to get people on your side!

They may think they're dedicated to The Cause but speaking as a Southerner you can understand when I say they're about as sharp as a bowling ball.  Bless their hearts.

Eric Worrall, writing a Watts Up With That gets right to the heart of the matter with a photo: 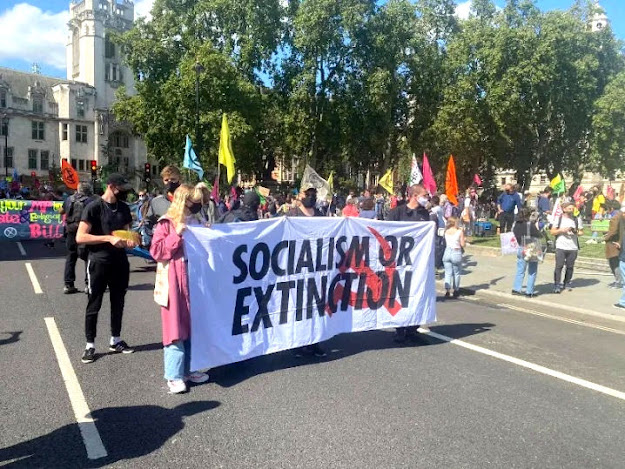 Again, sharp as a bowling ball.  How can anybody espouse socialism as a cure for their imagined environment problem when socialist countries have had the worst records on pollution in the history of the world?  Did they ever hear of something called the Chernobyl nuclear disaster?  Did they ever hear it was largely caused by the Soviet government concealing major reactor design flaws instead of addressing them?  Listen up, Extinction Rebellion.  You know, the Soviet Union's flag featured that hammer and sickle you guys have on your banner.  It shouldn't be that hard to look up.

Wait, I know the punch line!  They didn't do socialism right!  Right?  No matter how many times you point out to socialists the disastrous, murderous history of socialist regimes, the answer is always that they just didn't do it right.  My answer to that is always to say, "if nobody that has tried it in all of human history has gotten it right, what makes you think you're smarter than everyone before you in all of human history?"

The article on WUWT, by the way, links to a summary of how bad it was in the old Soviet Union written by a guy who actually lived there as a reporter on environmental issues.  I'll borrow one little paragraph out of it:

The Niger delta? The development of the oil industry of Western Siberia was carried out from the 1970s with great haste, using pipes and welding equipment that were often defective. By the 1990s the wells and pipelines were leaking like sieves, a Niger delta every few hundred kilometres. The Bhopal disaster in India? It’s only through enormous good luck that in Dzerzhinsk, the city east of Moscow that remains a key centre of the chemical industry, thousands of residents haven’t been killed by a similar leak of toxic gas. An activist from the place once argued to me that in any case, the levels of dioxins and other lethal chemicals to which the population was exposed ensured a cumulative “Bhopal” every few years. What were the local morbidity rates? Either the information was purposely never collected, or effectively suppressed.

The entire article is a couple of screens long and has example after example.  The punch line to this story is the article describing how bad the environmental care was in the Soviet Union is published on The Socialist Alliance, a pro-socialism Website!  Of course, the root cause of their problems is that the Union of Soviet Socialist Republics didn't know how to do socialism right.

As Ronald Reagan said, “Socialism only works in two places: Heaven where they don't need it and hell where they already have it.”

Labels: big freakin' out of control government, commies and other idiots, enviro-nuts and flakes