Spinning My Wheels in the Shop

I see my last shop date was August 19th and here it is August 40th, so it has been way too long.

There weren't too many parts to make to complete the intake/exhaust valve stack at that point, just a couple of valve retainers, and a couple of springs.  First, I had to press fit the valve cages into the stack of aluminum slices that make up the intake and exhaust manifold, cut the valves to length and grind them against their valve cages.

The valve retainers are fiddly little parts; 1/4" diameter shoulder (1/32" tall) and then a 3/16" diameter by 1/16" long nub that sticks into the spring.  When it's assembled the stack-up looks like this (red arrow pointing at the intake valve retainer). 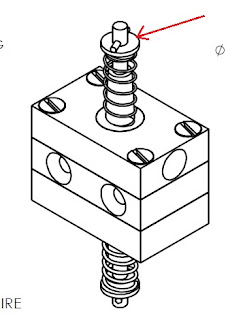 And the two valve retainers fresh off my manual lathe looked like this.  Crappy surface finish! 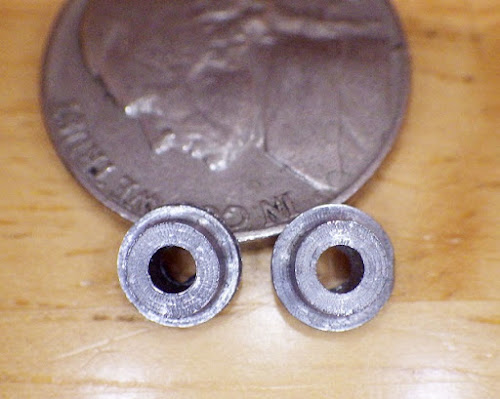 I've been stuck on the springs for at least a couple of weeks.  I've only made a couple of springs before but they didn't have a critical size like this.  I've always followed the step by step instructions on Dean's Photographica and they've worked but what's happening is that I wind the wire tight on to a piece of round bar, and they expand in diameter.  Say it's wound on 3/16 rod; they expand to 1/4" and the retainer falls into the spring (or screws itself down the wire ramp).  I can't seem to get the spring to a usable diameter.  It needs to be 3/16" inside diameter to fit over the valve cage and it can't be so big that the retainer falls into it.  I've tried winding onto a smaller diameter rod, but that one hardly expanded at all.  At this point, I have three that are too big and one that's too small.

I thought my best chance would be to wind it on a 3/16 drill rod and clamp the wires securely.  To clamp the wires, I'd cross drill the rod and tap it for a couple of #2-56 screws.  Then it's clamp one end of the wire, count out the number of turns, and wrap the far end of the wire around the far screw, before putting it in the oven for heat treatment. 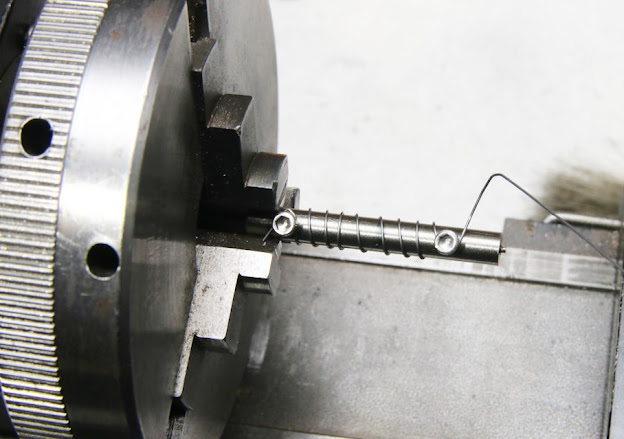 I should point out that while this is on my Sherline lathe, that's just because the rod is held in the lathe chuck.  This isn't done under power: I turn the chuck by hand to put the wire on.  After the heat treatment, this one opened up to around .220, still just a bit too big.  The valve retainer slipped into the spring.

I haven't tried the exhaust valve spring, but I have some springs I bought back in the GB-22 project days and one looks like it just needs to be cut to length.

Plan B is to remake the valve retainers to be 3/8" OD with a 1/4" nub to fit inside the spring.  I don't think it matters and I've spent too long here.

Meanwhile, I'm making the muffler and searching the drawing to make sure there aren't parts left I haven't made.  I put in a hardware order to be sure I had everything to put it together and ordered an RC airplane carburetor.  I'm getting close to being able to put it fully together, if I can figure out how.