That old quote by economist Murray Rothbard ran through my head when I heard of the book justifying and praising looting by Marxist writer Vicky Osterweil, "In Defense of Looting."  Peter, Bayou Renaissance Man, wrote about this and more yesterday.  No link for Ms. Osterweil because through the concentrated weirdness of the Internet, I might get her a book sale.  I don't know of a way to loot her book from Amazon.

To borrow a couple of concepts from Rothbard,

“The human right of every man to his own life implies the right to find and transform resources: to produce that which sustains and advances life. That product is a man’s property. That is why prop­erty rights are foremost among human rights and why any loss of one endangers the others.

Author Brad Polumbo, a self-described, “libertarian-conservative journalist" writing at the Foundation for Economic Education,” digs into the controversial NPR interview with Osterweil at the FEE website. Osterweil's interview (and presumably her book) is sloppily-thought out, full of the Marxist, economically illiterate, identity politics-driven drivel we're surrounded by.  She tells the NPR interviewer:

“When I use the word looting, I mean the mass expropriation of property, mass shoplifting during a moment of upheaval or riot,” Osterweil says. “That's the thing I'm defending. I'm not defending any situation in which property is stolen by force. It's not a home invasion, either. It's about a certain kind of action that's taken during protests and riots.”

“[Looting is] taking those things that would otherwise be commodified and controlled and sharing them for free,” she continues. “[Looting] demonstrate[s] that without police and without state oppression, we can have things for free.”

Contempt for looting, meanwhile, is driven by “anti-Blackness and contempt for poor people who want to live a better life,” Osterweil claims.

Sloppily-thought out?  Let's start out simply with her definition of looting.  It's self-contradictory.  She says, "I'm not defending any situation in which property is stolen by force" but how is taking something from a store and setting fire to the store not just the use of force but the use of deadly force that would justify a self-defense shooting?  As Polumbo points out:

After all, what happens if people do not allow the mob to take their property? 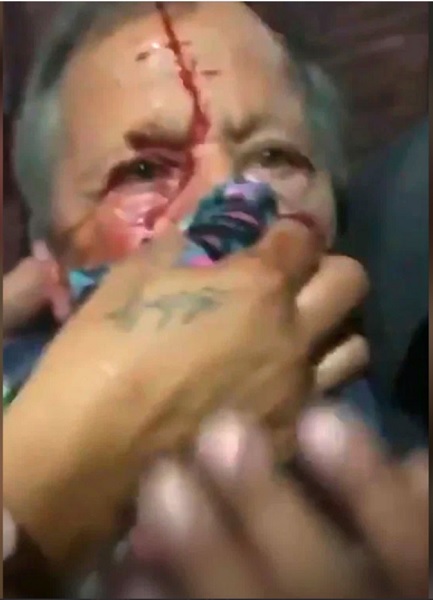 Far from being "free", as Osterweil says, everything stolen imposes costs on other people.  Far from being equitable, the looters dominate the looted either killing mercilessly (like retired officer Dorn) or just beating enough to break bones (like the gentleman shown above).

If the owners aren't in the store, and don't suffer beatings or worse, they're most likely still financially ruined with their lives and dreams shattered.  Osterweil talks about insurance, the usual nonsense about insurance replacing things, but I'd bet that even if the store owners don't file any claims as a result of the riots, their rates will go up next year because the risks in their neighborhood skyrocketed.  The Watts riots in Los Angeles were studied and said to have reduced the quality of life improvement for the blacks living in that area for at least a decade.  The entire community suffers from looting.

The plain truth is this is the same communist drivel we've heard for as long as we've been aware of the world.  Communists like Osterweil think looting is nonviolent because they don't believe in property rights.  Osterweil wants to eliminate private property with every aspect of life controlled by the omnipresent government.  Her argument that looting is nonviolent stands in contrast to the body count since the rioting started, currently near 20.  Wishing looting to be victimless and innocent doesn't make it so.  The history of communist revolutions is that useful idiots like Ms. Osterweil end up in front of the firing squad fairly quickly.  Communist leaders don't want revolutionaries once they're in charge; they want obedient servants.