A Ham Radio Series 13 – What Do You Do With Ham Radio?

I thought I’d switch gears here from being fairly deep into the technical side to the general side.  I see regular references to clubs putting together programs to help new hams out.  There’s a perception that “too many” new hams get a license and never get active on the air because nobody helps them get started.  I don't know how many that is, but it seems to be a shame.

Let me start by saying I sure can’t tell you how every radio you could possibly buy will work, but I can offer some help about ham radio in general.

So let’s begin with what do you do with ham radio?  I refer to ham radio as a thousand hobbies with the same name and only one thing in common: communications.

By communications, I mean generally meeting and talking with other people; the really old ham term for talking is rag-chewing, which you can see if you can visualize how your jaw might move chewing on an old, tough rag.  The chats can be local or across the world.  Worldwide contacts tend to be more or less exchanging signal reports and fairly formulaic bits of information.  This is partly because of language differences, if there are any, partly because stations from “rare” countries (rare is defined as any country you personally haven’t worked (contacted) and want to) tend to attract crowds (pileups) of guys calling rudely and partly because of an international regulation that says contacts between hams in different countries should be about things so trivial that recourse to commercial communication isn’t necessary.  That law is because in many countries, the government controls the phone, telegraph and internet and doesn’t want to lose revenue.

I’ve never heard of anyone being prosecuted for violating that but maybe it happens overseas.

Basic contacts, are kind of formulaic; there’s the exchange of callsigns, so that each side is sure whom they’re talking with, signal reports of readability and strength, or for Morse code (CW) Readability, Strength and Tone (RST), then usually location (QTH) and name.  The same basic contact exchanges are used for every mode, from voice to the most exotic digital modes.  There are common abbreviations and prosigns in ham radio that are helpful to know.  You may see a long table of abbreviations beginning with a Q such as QSL, QTH, QRP and more.  Some of them are far more common than others but it's helpful to keep a list near your radio when you're getting started, to minimize confusion.

There are many digital modes in ham radio; some are more suited to this casual conversation than others.  Some radios only require a USB connection to the computer to use any of these modes; others might require analog sound in and out of the computer so many ham shacks have a computer in them these days.  Those radios that require an analog interface generally use a small piece of hardware to connect them; things like the SignaLink USB or RigBlasters.

Last year, during repairs of the lightning damage to my station, I wanted to be able to get my backup radio working quickly.  The main station radio would do digital modes by USB, while the backup required analog audio.  My modification involved getting one SignaLink USB and two cables for the radios, so that I could change one cable that plugs into the SignaLink and switch radios.

The conversational modes include radioteletype (RTTY), the oldest keyboard mode in ham radio, PSK31 and other Phase Shift Keying modes, FSK (frequency shift keying) modes including Multiple Frequency Shift Keying (MFSK) modes and those mentioned in this seven year old post.  In these keyboard modes, conversation is in free form text and you can type messages as long as you want.  The modern digital modes that allow copying very far below the noise level (of the entire audio bandwidth), like WSJT FT8 are much more restrictive of the number of characters sent because they limit the times of each side of a contact. There are many programs that will decode these modes for you (other than FT8). A very popular program is called fldigi which I've used a few times in the past.  For the last several years, I've been using one called DM780 that comes with Ham Radio Deluxe, but that's not a free app.

It’s not uncommon to try to listen for these modes and not hear anyone.  Sometimes you can try to call a CQ with one of these modes – if everyone is listening for someone else, nobody is calling.  I just tried to find a current and detailed list of frequencies for all digital modes, with no luck.  I would suggest if you want to find where to listen (or call) in some mode that you search the web by the mode name.  For example, if you want to search for PSK31, don't search "digital modes", search "PSK31 frequencies", or even more specifically, such as "PSK31 40m frequency."

A sub-branch of just plain communications is certificate chasing or “wallpaper collecting” (the certificates are on paper, after all).  There are very common and popular awards, such as working 100 recognized foreign countries (DX Century Club or DXCC with endorsements for certain bands or modes), Worked All States, VHF/UHF Century Club (100 Maidenhead grid squares) and other certificates that show some accomplishment.  The range of certificates to collect go from these "Major Awards" to very small, very limited areas, like working some number of hams in one small area of an overseas country.

The second main branch of communication is doing it for public service and disaster communications.  In addition to running out of space in this post, I’m rather ignorant of the details of this because it’s one of those aspects I’ve not done anything with.  I’d start with the American Radio Relay League’s page and start looking around. 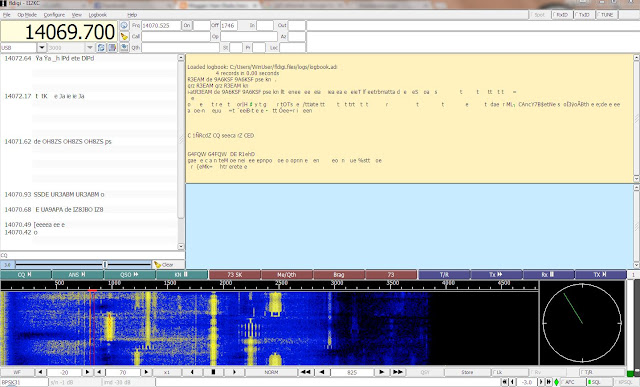 Posted by SiGraybeard at 6:57 PM