Let me lead by saying that while I said I didn't feel comfortable with the subject last night, I did several hours of reading and digging into the subject, enough that I think I can be conversant.  Not at all an expert, but maybe I can help a little.  As I said then, if you really want to come up to speed, the article on Revolver is worth the time to read.

I find that everyone is all over this story.  That article on Revolver links to two more pieces in a three piece series (so far).  The Burning Platform has a piece, linked to three others.  A simple web search brings up many people saying we're in the battlespace prep phase of a Color Revolution here in the US, starting no later than Election Day.  Glenn Beck has devoted hours of radio air time to interviews with people who know about the tactic, and put an hour special show up on YouTube last night.

The Revolver article talks about the originator of the concept, with this introduction:

This combination of tactics used in so-called Color Revolutions did not come from nowhere. Before Norm Eisen came Gene Sharp—originator and Godfather of the Color Revolution model that has been a staple of US Government operations externally (and now internally) for decades. Before Norm Eisen’s “Playbook” there was Gene Sharp’s classic “From Dictatorship to Democracy,” which might be justly described as the Bible of the Color Revolution. Such is the power of the strategies laid out by Sharp that a Lithuanian defense minister once said of Sharp’s preceding book (upon which Dictatorship to Democracy builds) that  “I would rather have this book than the nuclear bomb.”

It's hard to keep the characters straight because they bounce back and forth, only seemingly having worked in the Bill Clinton or Obama administrations and being Trump haters seems to unify them.  One of Gene Sharp's disciples, Michael McFaul, served as ambassador to Russia under Obama.  McFaul is now one of the group apparently organizing the Color Revolution against the US.  He put together this list of the seven pillars needed to support a Color Revolution (my notes):

1.  Need to start with semi-autocratic regime, not fully autocratic – gives them the ability to say, “he’s a fascist”
2.  Unpopular incumbent leader
3.  United and organized opposition
4.  Effective system (control of media) to convince the public voting was falsified; plants the ideas before the election
5.  Mainstream media to push falsified vote message.  Currently doing battlespace prep
6.  Political organization to flood the streets, protesting election fraud; “thousands to millions in the streets”
7.  Divisions among regime’s military and police – so that they fight each other instead of stopping the attacks in the street.

McFaul put out this tweet that's emphasizing the last pillar.  Concerned that people were seeing it that maybe shouldn't, he deleted it.  But the Internet is Forever: 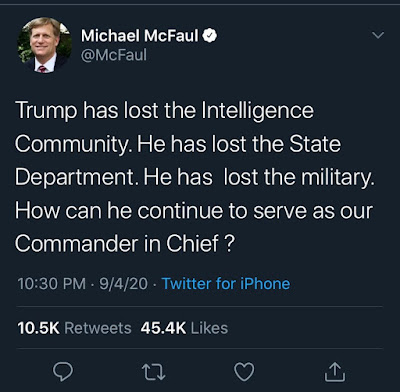 If you look around, there's battlespace prep everywhere.  A group called Momentum, veterans of Occupy Wall Street - training people to do occupy tactics.  They're training communist groups like BLM and the Sunrise Movement (Green New Deal commies).  You might recall a group called Axios was in the news last week (week before?) talking about how there could be a “red wave” on election day that they overthrow with mail in ballots.  Another group is called Fight Back table.  Their role is “occupy shit, hold space, shut things down – for weeks or months”

There's more.  You may have heard of a group called the Transition Integrity Project (as in transition after the election).  As always, the name is the exact opposite of what they want.  They feature John Podesta and Bill Kristol,  so it’s “bipartisan.”  Advisors from the Clinton/Obama/Biden teams are war gaming civil war.  In the war game, John Podesta played Team Biden.   He proposed that California, Oregon and Washington (“Cascadia”) secede from the country unless Republicans agree to reform the country: eliminate electoral college, divide California into five states so they have 10 senators, make Puerto Rico a state.   All of which will ensure a conservative will never be president again.

The Obama administration ran the Color Revolution in other countries.  Sometimes it worked, others it didn't.  I think the highlighted portions of this text, from the Revolver article, sums it up pretty well. 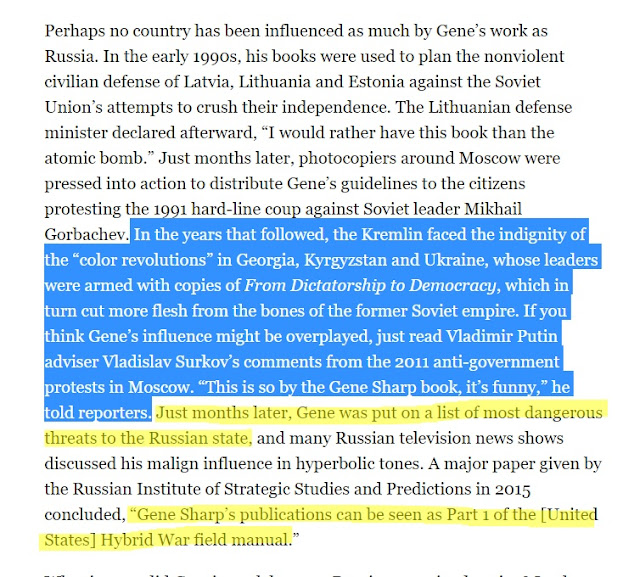 Considering the people behind the Color Revolution in the US, and the number that have worked for the US Fed.gov at various times, the whole revolution seems to be the Deep State revolting against the American people.  They are mounting a Color Revolution to ensure the American people don't interfere in the election.  As always, they know better than you what you need or want, so shut up and let them rule.