Author Daniel Horowitz, writing for the Blaze, summarizes the news on the COVID-19 front and it all seems like good news.  As of September 4th, over 11,000 college students have tested positive for the virus, although that was using the Polymerase Chain Reaction (PCR) test noted for a high false positive rate.  There have been zero hospitalizations and zero fatalities.  Sounds like good news all the way around, as we're in something like Day 200 of the 15 day shutdown to Flatten the curve.

Remember the goal of flattening the curve? Ensuring that hospitals weren't overrun? Well, what do you call a scenario where thousands of cases result in zero hospitalizations? I'd call it the ultimate flat curve – or downright flat line. Yet rather than recognizing the detection of mild cases among college students as portents of good news, universities continue to sow panic for no good reason.

Dr. Andrew Bostom, a cardiovascular and epidemiology researcher, posted a spreadsheet on twitter of all the positive tests in 17 state university systems as of September 4.  Clearly a small sample of all the colleges in the nation, but the data looks like this: 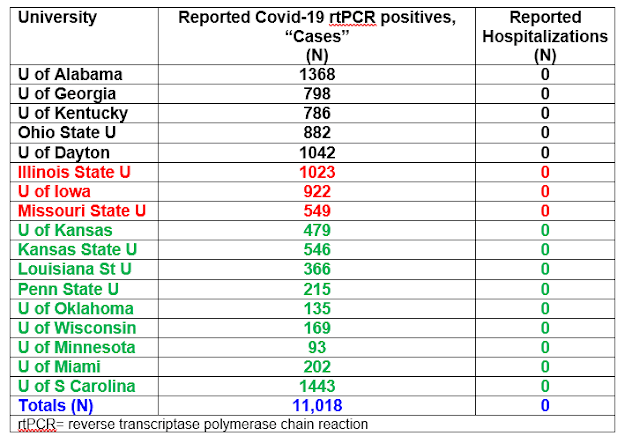 Since it's a PCR test, prior experience says the majority of those are false positives.

Many of them could be false positives, insignificant viral loads, or the dead RNA of a virus that passed weeks ago still being carried around in the student's nasal passages. There is no metric for any of this being monitored in the testing. The irony of the University of Arizona using positive testing of benign cases as the baseline for such draconian measures is that so many of those tests turn out to be false positives. Out of the 13 positive results among members of the university's athletics department last week, 11 of them turned out to be false upon retesting.

That false positive rate (11/13) is  85%, so if we did a worst case analysis and assumed 90% of these college students were really negative, only 10% (1,100) were really positive.   Since it's such a small sample of students and schools, I have hope there really are 11,000 positives out there, although the more people who have had the virus and developed antibodies to it the more likely we achieve "community immunity."

As always with this situation, the real thing to be afraid of is the State.

Last Monday, Ohio Health Director Lance D. Himes signed an order requiring even students who test negative to be isolated in a quarantine house on campus. It includes asymptomatic individuals or even those merely "exposed" to a COVID-positive individual. They'd be barred from exiting the quarantine house without written permission from a health official, and individual universities would decide whether parents are even allowed to visit them. This is a mandate for de facto prison – all for an "epidemic" built on false or notional positives with no health risks beyond the ordinary bugs that spread on campuses every year.

By sending your children to Ohio's public colleges, you are essentially sending them off to jail, because it's nearly impossible for them not to be quarantined. Ohio State University is conducting mandatory random testing of 8,000 students each week via their "surveillance testing program." Based on everything we know about false positive or old dead viral RNA, it's a near-certainty that the testing will net dozens of people every week. Now, this order will force numerous friends and dorm-mates to be confined as well.

Because of the amount of latitude variance that the US covers, we bridged two zones in R. Edgar Hope-Simpson's curves of influenza epidemic extent vs. time of year (which has empirically worked for related viruses well - in the sense that it "rhymes," not duplicates). In the first quarter, the worst places to be were high latitude - the sun was low in the sky.  As the sun moved to return to those northern states (April through September), the problem moved south, but the overall numbers of deaths were lower than in the winter; again, similar to Hope-Simpson's work on Influzenza. 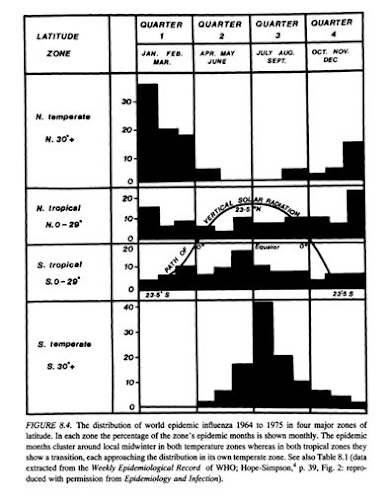 The summer isn't over, so the story hasn't played out, but the following plot shows data as of Sept. 7th. 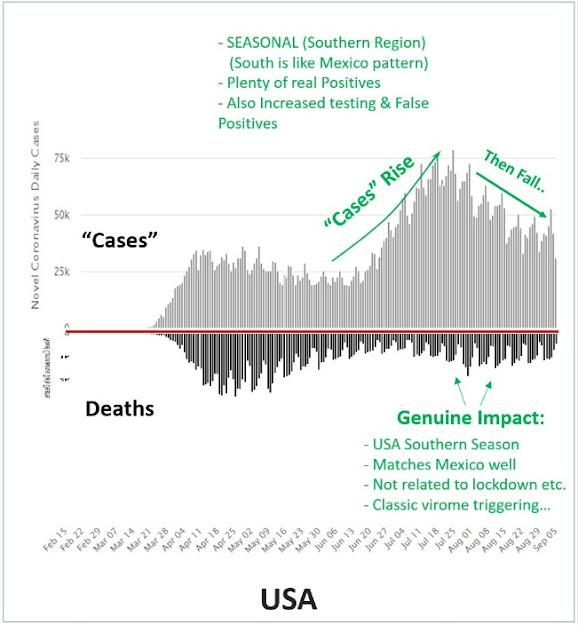 (Source: Ivor Cummins in Twitter feed of The Ethical Skeptic.)

The obvious good news is that CDC-reported Covid deaths are as low as they were in late March, and headed lower.  Graph at William M. Briggs, "Statistician to the Stars".  Since Gov. Cuomo and other northern governors already killed off the most vulnerable in their states, that high death rate is unlikely to repeat.