On California Banning Gasoline or Diesel Cars by 2035

It was in May of 2017 that I noted California decided to become uninhabitable in 10 years (2027).  The reason?  The state legislature had mandated they reduce carbon emissions to 40% of the state's 1990 levels by the year 2030.  The new levels were to be 60% of the required 2020 levels passed previously.  Using advanced technology called a pocket calculator and an available number estimating CO2 sensitivity, I calculated how much difference this would make on world temperatures.

In a piece I wrote in 2010, my first year here, I found a number for the amount of CO2 required to raise global temperature 1 degree C - according to the warmist's models. 1.8 million million metric tons.  California is going to reduce emissions by 172 million metric tons.  Since 172 is close to 180, lets be generous and round their reduction up to that.  That means they will reduce global temperature rise by 180/1,800,000 or .0001 degree C, which simply isn't detectable in a system as big as the planet.

Not to be outdone by previous virtue signalers, Governor Gabbin' Nuisance (D - Uranus), issued an executive order on the 23rd banning the sale of internal combustion engine cars by the year 2035.

“This is the most impactful step our state can take to fight climate change,” Newsom said. “For too many decades, we have allowed cars to pollute the air that our children and families breathe. You deserve to have a car that doesn’t give your kids asthma. Our cars shouldn’t make wildfires worse – and create more days filled with smoky air. Cars shouldn’t melt glaciers or raise sea levels threatening our cherished beaches and coastlines.”

That's just full of nonsense.  I tell you what, I'll say it might possibly be true that Internal Combustion Engine exhaust is contributing to kids getting asthma.  Cars are having no effects on wildfires.  Historical records show the number and intensity of wildfires going down for the last hundred years.  What you're seeing, Gabbin', is the effect of your terrible forest management.  Cars aren't melting glaciers or raising sea levels, which have been rising since the end of the last ice age (and you'd best be damned glad they're not going down now because that would indicate the glaciers are coming back).  That's too much to get into the space here tonight.

By 2035 every new car sold in CA will be an emission free vehicle.

There is simply no such thing as emission free vehicles if you look at the total environmental cost.

But ignore for the moment that the cars need to be produced from raw materials that are extracted and refined in ways that produce emissions, and are higher emission than ICE-powered cars.  Electric cars run on fuel, too, it's just not in a tank inside the vehicle.  In particular, they run on natural gas, coal, or whatever is producing electricity in the state (which in California these days is practically nothing).  In 2019, U.S. domestic production of electricity was 12.9 quadrillion BTUs (quads) from natural gas followed by 9.4 from crude oil, 5.3 from coal, 8.5 from nuclear, 2.7 from wind and 1 quad from solar power. The last two (wind and solar = 3.7 quads) can’t even begin to replace the first three (oil, gas and coal = 74.6 quads).  [Note: my numbers derived from numbers on that EIA.gov website]

Eric Worrall, writing at Watts Up With That notes:

Governor Newsom in his interview said “we no longer need to drill things or extract things to advance our economic goals” (see the Twitter video above).

Every study I have seen about renewables suggests that any serious attempt to go 100% renewable would require far more drilling and extracting than a fossil fuel powered economy, like a 2700% increase in lithium extraction. Even carbon intensive cement production would have to increase substantially – all those wind turbines and solar panels need cement bases.

Manufacturing cement largely consists of heating limestone or other Calcium Carbonates to 825C (1517F) degrees, to separate the limestone into Calcium Oxide and CO2. There is a lot of CO2 in limestone. Current cement manufacture accounts for 8% of global annual CO2 emissions. Cement does not last forever. A substantial permanent increase in global cement production would pretty much cancel any CO2 savings from going renewable.

If California continues their silly commitment to not having nuclear power and creating more "renewable energy", they'll be clear cutting forests to make way for wind turbines and solar panels, and then turning the Sierra Nevada mountains into strip mines to mine the rare earth metals there.

Which raises the possibility that California is deliberately trying to get most of its population to leave the state.  That would reduce their energy demands to meet their Green Dreams. 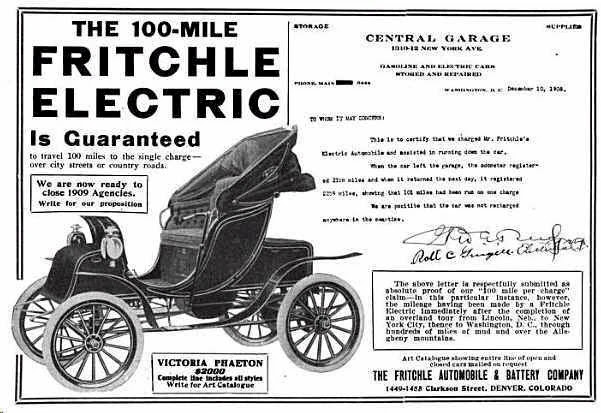 An early electric car from here.  Electric cars predate IC engine cars by nearly 80 years - the US Department of Energy says primitive electric cars were around in 1828, and it wasn't until the Model T in 1908 that IC engine cars left them behind.  Interesting that the range hasn't gone up in proportion to the other advances in cars today.