Last November 27th, I posted a piece saying among the things I'm thankful for is that the Rocket Ranch 35-ish miles north of here doesn't drop boosters with poisonous propellants on me, like the Chinese launchers do over there.  This week we get another close look, courtesy of social media coverage and citizen reporters who got the film out.  This was covered last Tuesday in Ars Technica, where Eric Berger brings the details.

On Monday, a Long March 4B rocket launched from China's Taiyuan Satellite Launch Center carrying a remote-sensing satellite. This 50-year-old spaceport is located in north-central China, about 500km to the southwest of Beijing.

As often happens with the first stages of Chinese rockets launching from the inland Taiyuan facility, the spent Long March 4B booster fell downstream of the spaceport. In this case, it landed near a school, creating a predictably large cloud of toxic gas.

The reason this is an issue is the Long March 4B, and other rockets regularly launched from the Taiyuan site are fueled by Hydrazine (fuel) and Nitrogen Tetroxide (NTO - oxidizer).  The combination is an efficient and good fuel.  The drawback is that they're highly toxic and highly corrosive.

Check out this image taken from an observer near the school: 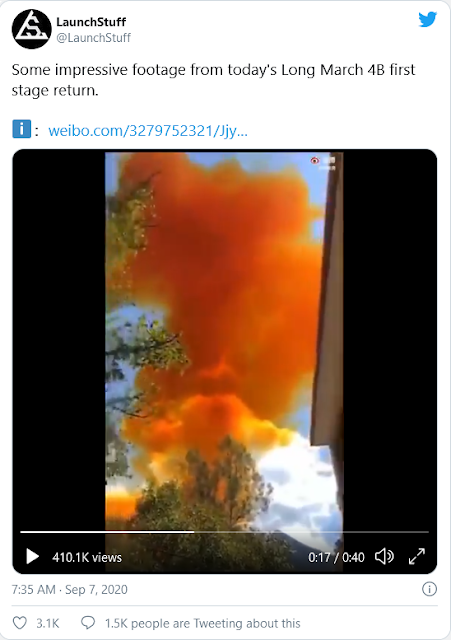 I honestly don't know what a fatal dose of that gas would be, but I'd be running upwind from that.  The full video embedded at Ars shows the booster falling and some shots of the damage. Worth the 40 seconds to watch.  There was no release of a number of injuries or fatalities from the booster or the gas.

The combination of hydrazine and NTO is well known in rocketry and used in modern craft like the SpaceX dragon and crew dragon capsules where it's the fuel for the emergency abort system.  Other than small-volume, limited-use systems like that, the last US rocket to use hydrazine-NTO for an entire stage was the Delta II which used it to power the second stage.  That rocket's last launch was in 2018.  It's not widely used in the world.

Yet the majority of China's launch fleet is powered by hydrazine fuel and nitrogen tetroxide oxidizer. This includes its human-rated Long March 2F rocket as well as the widely used Long March 4 family. All of these rockets, with their toxic first stages, launch over land and have caused numerous incidents over the years. These fuels are cheap and relatively easy to use, and it would have been natural for China to use them in the 1980s and 1990s when these boosters were developed. But their use continues unabated today.

As I noted in that post last year, China has decided to start investigating grid fins, like the Falcon 9 uses, which could give them the ability to avoid dropping rockets on schools, but that R&D project doesn't seem to be out of compassion for their citizens.  It appears to be related to a desire to master the technology to reuse rockets like SpaceX has done, not to protect citizens.  China has been launching rockets for more than 30 years, and grid fin technology has been known the entire time.  It's only now that SpaceX has made the technology useful and dependable that they're interested in it.

The Long March 5 uses kerosene and liquid oxygen, just like the Falcon 9, much less poisonous in the event a booster crashes into a populated area.  So it's not like they don't know how to use that fuel system.

Oh, by the way, the Long March 5 is launched from the Wenchang Spacecraft Launch Site, not the Taiyuan Satellite Launch Center.  Wenchang launches out over the ocean.  The only schools it affects are fish. 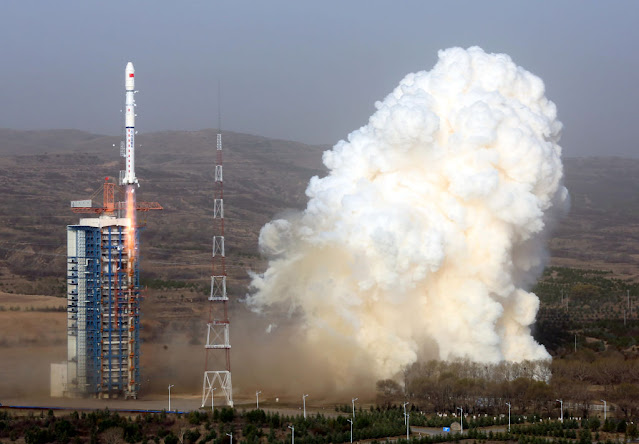 This shows the launch of another Long March 4B from the Taiyuan Satellite Launch Center in Taiyuan in north China's Shanxi Province in April, 2019.

Labels: commies and other idiots, space