The story broke last May that NASA had selected three companies to begin initial development of lunar landing systems that will take astronauts back to the surface of the Moon by 2024.  The three companies got different payment amounts; Blue Origin and the "National Team" was awarded $579 million, Dynetics was awarded $259 million and SpaceX was the lowest of the three at $135 million.  Those awards are for a period of 10 months.

Today's story, courtesy of Teslarati, is that all three companies have passed their first review, a Certification Baseline Review (CBR).

NASA’s acceptance criteria for CBR documentation is about as general as the space agency gets, requiring providers to demonstrate at least a basic level of maturity and expertise. Like the name suggests, it sets a baseline from which NASA and SpaceX, Dynetics, and Blue Origin’s National Team will hone in on challenges and concerns specific to each system. SpaceX’s proposal is almost certainly unique, however, given that the company is the only one anywhere close to performing actual flight tests of a (relatively) similar system.

The post and CBR leads one to believe there's nothing here but paper.  A month ago, Blue Origin delivered a full-scale, engineering mock-up of their lander to NASA for feedback on control positions and how the astronauts like the inside layout of the lander.   Dynetics followed up by delivering their own full-sized, mock-up lander on September 15th.  It's intended for the same purpose: gather feedback on how the end users like the control layouts.  I haven't heard about SpaceX delivering a similar mock-up; my guess is the instrumentation is going to look like the Crew Dragon that NASA knows.  SpaceX proposed a derivative of the Starship design, which can be seen at any time.

Dynetics' lander concept is quite different from Blue Origin's.  Dynetic's concept is, to borrow the term, landscape mode, while Blue Origin's is portrait mode.  I put together this graphic last May to show the three landers being developed.

Left to right, Blue Origin, Dynetics, and SpaceX.  If you can envision the Dynetics lander without the massive solar panels, it's squat and wide. 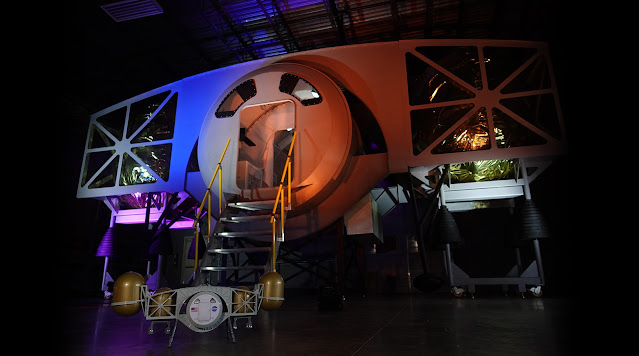 The Dynetics lunar lander mock-up as delivered to NASA.  Their photo, of course.