Although this isn't the kind of radio hobby stuff that requires a ham license, at least here in the US, Spaceweather.com reported perhaps the most remarkable radio monitoring story I've ever heard.

Earth and Mars are pretty much at opposition now, and the closest approach since 2003, so he had that working for him.  Still, at the point of closest approach on October 6, the red planet was 38.6 million miles away.  How much signal is lost over that distance?

The free space path loss is computed with the expression:

Here, f is the frequency in MHz and d is the distance in miles.

Off the top of my head, that implies a lot of antenna gain on both ends.  We don't know about the details on the MRO orbiter, but we know the hardware Scott used.  This dish measures a mere 60 cm aperture - 23.6 inches.  Using a standard formula I get about 33 dBi gain from an antenna this size.  Very high gain compared to a typical ham's Yagi beam but since gain is a function of diameter, it pales compared to the gain NASA gets on much bigger antennas.
Still, let's say that NASA put the same gain antenna on the MRO.  That's 66 dB gain between them and that turns the path loss into 200 dB.  Start with about 1 Watt at the transmitter and the signal comes out around the thermal noise floor in a receiver.  I'm sure this BOTE (Back Of The Envelope) arithmetic must be overlooking something, but it seems close. 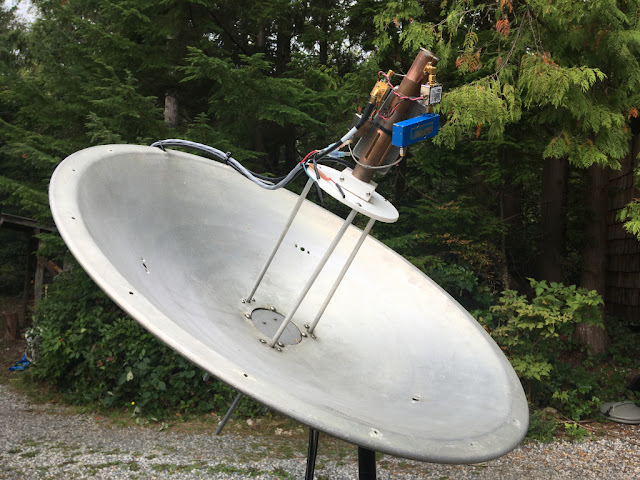 Tilley is a leader in the field of satellite radio. Dead satellites, zombie satellites, spy satellites: He routinely finds and tracks them. "But this was a first for me," he says. "A satellite around Mars!"

It's not easy picking up radio signals from distant planets. NASA does it using the giant antennas of the Deep Space Network. Tilley uses a modest 60 cm dish in his backyard in Roberts Creek, BC. This week's close encounter with Mars set the stage for his detection.

"MRO's signal is weak, but it is one of the louder signals in Mars orbit," says Tilley. "The spacecraft has a large dish antenna it uses as a relay for other Mars missions. With the proximity of Mars these days, it was the perfect time to try."

That link is to his personal web page, Riddles in the Sky.  Not updated very often, his Twitter feed seems to be his emphasis, but both are full of nerdy goodness.  I've stumbled across web references to guys who search for satellites before and never paid it much attention.  This is pretty cool.
Posted by SiGraybeard at 9:18 PM