I'm trying to get myself to work fast enough to merit a weekly post.  I'm getting close to being able to try to get the engine running but not there yet.

Last week's update focused on issues with what I've been calling my counterweight - the drawing I copied it from called it a crankshaft throw.  The crankshaft wasn't staying in the hole that was intended for it no matter what I did.  I thought I could always re-make it, and several comments suggested I peen the shaft to to raise bumps of metal and enlarge the diameter by .002 or .003 that way.  I thought I'd go with something I've done many times, and made a bushing.  I enlarged the hole to 3/8", reamed to size, and then made a bushing that was 3/8 OD and 5/16 ID.  Then I attached the bushing with the green LocTite 680. 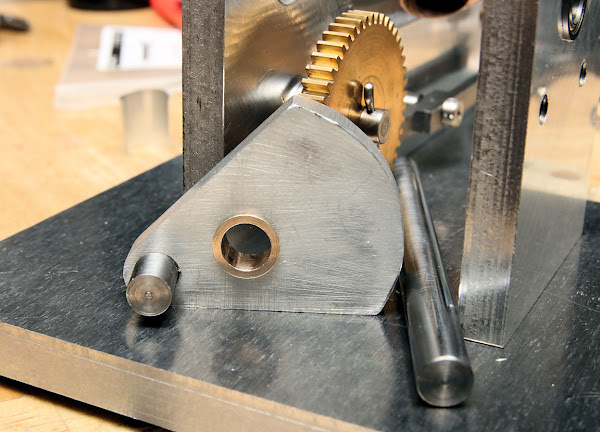 This worked out well.  To get the shaft to press fit into the throw into the bushing, I had to push it in by putting the two pieces in a woodworking bench vise and close the vise.  A good, tight, press fit.

Once I had the crankshaft set in the throw, it was then easy to build up the engine the rest of the way. 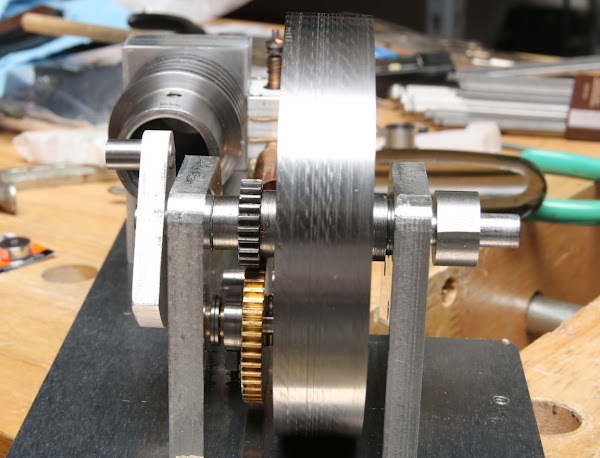 The work for the last couple of days has been pinning the flywheel to the crankshaft.  The flywheel will turn on the shaft, a sliding fit, and the ignition timing is preset by adjusting the angle of the crank before pinning it.

You will note that the rectangular crankshaft throw that's in this sketch is not that shape I have. I spent a little CAD time figuring out how to modify the position of mine so I could set it manually.  The top edge of my crankshaft throw needs to be sloped down to the right by 8o to make the line between the centers of crankshaft and piston connecting rod 15o to the horizontal. 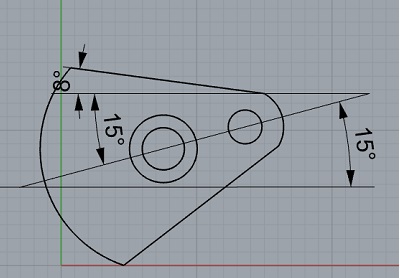 Once that position is set, the flywheel is clamped to keep it from moving and the flywheel is drilled through, going partially through the crankshaft.  I bought an assortment of spring pins for this, but I haven't pinned it yet.

Aside from that, I ordered a plastic fuel tank from a hobby shop, that should be here Monday. I haven't put the piston rings on the piston and fitted that, yet, but I have everything to do that. I still need my ignition points and to hook up the ignition components. Then I should be able to run the engine with an electric motor driving it for a half hour or so, to ease the fit somewhat. Finally, after that, I should be able to start trying to make it run on its own.

EDIT 1116 AM EDT: to move the second to last picture a little more to the left.