Batteries that don't have metal electrodes, that are completely organic and fully biodegradable exist.  They're still somewhat of a laboratory curiosity in that I can't tell you a name that's on the market.  They're even worse at energy density than batteries that don't check all those squares in your game of Buzzword Bingo.

I should point out that when they use the term organic, it's in sense that chemistry formally recognizes: it means that they're based on carbon compounds, not that they're grown on hippie farms.  As always, the common word biodegradable translates into normal-speak as "they will rot."

The article I'll refer to first appeared in the June Electronic Design magazine and focuses on work carried out by a team at Texas A&M University headed by Jodie Lutkenhaus, Professor of Chemical Engineering and Materials Science & Engineering.  In place of inorganic elements or compounds, like Lead and Sulfuric acid or Nickel and Cadmium terminals with a conducting paste, they created a battery using positively and negatively chargeable polypeptides.  Polypeptides are combinations of amino acids by what are referred to as peptide bonds.  The biggest and best known polypeptides are the proteins every living tissue is made from.  The battery polypeptides are only similar to those bigger proteins in the organic chemistry sense. 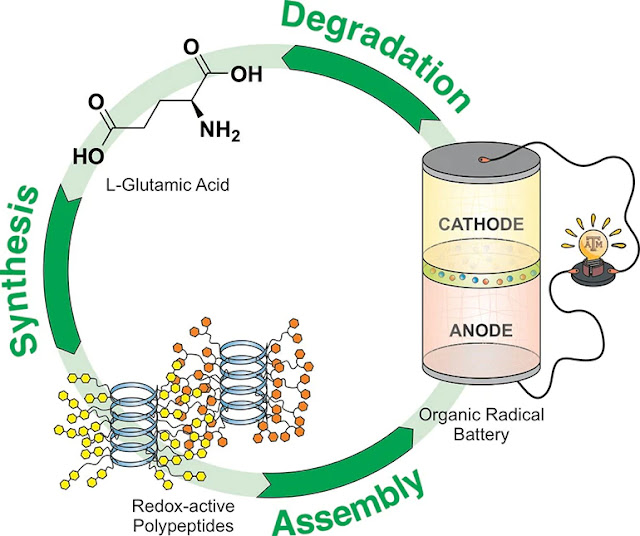 The process begins with an amino acid called L-Glutamic Acid (L meaning it rotates polarized light to the left; "levorotary").  L-Glutamic Acid is common in foods but not one of the "essential amino acids" that we can't synthesize and thus need to eat.

In basic chemical terms, they started with l-glutamic acid polypeptide chains, then attached 2,2,6,6-tetramethyl-4-piperidine-1-oxyl (biTEMPO) to make the cathode and 4,4′-bipyridine derivatives (viologen) to make the anode (Fig. 2). A radical-based chemical mechanism “shuttled” electrons between the two structures. 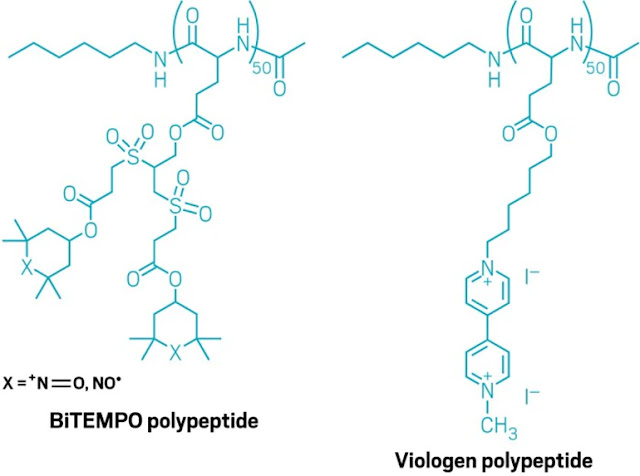 Of course, as anyone doing research on batteries will tell you: a battery is more than just making this glop and pouring it somewhere, it has to be packaged properly, too. The packaging is shown in the Electronic Design article, but looks much like (well...) a battery.  Anode and cathode separated (by some filter paper in this case) and connected positive to anode and negative to cathode.

The big question I had when I first saw this was how the energy density compared to other batteries, assuming it would be lower than existing batteries at this point in development.

The storage density of this battery, with a terminal voltage between 1.1 and 1.6 V, is about 38 mA-hr/gm and 60 mW-hr/gm, which about one-third that of lithium-based sources. Furthermore, according to their detailed, fully referenced comparison table, it’s in the mid-range of “organic” cells that are non-degradable.

Unless I've gotten too out of practice at converting units, milliWatt*hour/gram are numerically the same as Watt*Hour/kilogram.  60 W*H/kg seems lower than the stated 1/3 of lithium batteries, but not terribly low.  I've read of electric car batteries doing over 400 W*H/kg and some claims of twice that being seen in some lab somewhere.  Gasoline offers 12,000 W*H/kg.

Given that, it's reasonable to ask "so what?  Why should I care about a low capacity battery that doesn't seem to offer any improvements?"

The standard arguments against Lithium Ion batteries center on their not being recycled as much as people want (it costs too much), and that they use cobalt in their chemistries, a toxic metal that has become the target of human rights protesters - undoubtedly you've seen the pictures of children forced to work in the cobalt mines in horrible conditions.  Both of these objections are being raised in several places and everyone in the battery business is trying to come up with better solutions.