An Extended Visit and Walk Around Starbase with Elon Musk

I don't know how many of you are aware of or have watched the three videos that YouTube channel Everyday Astronaut (Tim Dodd) posted to YouTube but I've spent the two and a half hours watching them over the last few days and they're really rather remarkable.  I think it's nothing short of remarkable for the billionaire CEO of the world's leading private space company agreeing to spend that much time walking around his rocket factory with a YouTube video channel host.

Rather than embed them here, I'm going to link to them on YouTube.

In addition, Tim has a website EverydayAstronaut.com and a summary page for the three portions.  It helps you to see and save off to your computer (if you'd like) some of the more important aspects of this conversation.

While I think that anyone interested in SpaceX, the Starbase operations or Starship itself would find it easy to sit through the three interviews, I could imagine a lot of people would want more of the highlights.  That would probably fit the webpage better.

The three videos start in the evening at Boca Chica and Elon takes Tim on a tour through several of the construction buildings there.  As the second video starts, sundown has passed and the sky is darkening outside.  It's fully dark for the remainder of the second and all of third video.  Elon, Tim and his cameraman following them walk through lots of interesting areas.  He fires questions at Elon who answers them rather frankly.  Several times he feels the need to say that the way SpaceX works means that things he talks about may be right today and wrong tomorrow.

In the first video, Elon talks about his five step engineering process for developing Starship.  Much like Asimov's Three Laws of Robotics, Musk's Five Laws of Engineering are to be followed in this order:

After my years in design, I have to agree with these completely.  Number 2 isn't extremely relevant to lots of areas of engineering; saving the costs of taking out a small component doesn't mean much when you make a few hundred or a few thousand units, but gets more relevant when you make lots of them.  Think of saving two cents on something you sell 5000 of per year.  That's $100; not bad but you can't take the company out for lunch with that.  Now think of selling 5,000,000 a year, like a WiFi router or car stereo.

In Elon's case, he not only wants to manufacture quantities of Starships the space industry has never dreamed of, he has the added reality of rocket design.  For every pound he adds on the rocket - which will weigh in the vicinity of 200 tons - he reduces the payload by about two pounds.  He not only increased the weight of the rocket, he increased the weight of fuel needed to lift it.

Musk strongly believes that all the engineers should know as much about the things they're working on as possible.  Don't just concentrate on your little piece.  As an example, Musk noted that an order of magnitude more time has been spent reducing engine mass than reducing residual propellant, despite both being equally important.

It has always been obvious to observers that Elon Musk is driven by his goal to see mankind become an interplanetary species and to move out to other worlds.  His emphasis has been Mars, and that's what has driven him.  In the third video, I recall him saying that in the '60s as we went to the moon, there was a line sloping upward tracing mankind's stretch into the solar system.  Then, in the late '70s, the line shrank back down to Low Earth Orbit where mankind has stayed ever since.  We flew first Skylab and then the Shuttles while Russia flew Soyuz and Mir.  When the Shuttle era ended, that line fell back to the ground, at least for the US.  He didn't mention getting the line back to LEO with his own company, just that the line is moving in the right direction and he wants to see it take off.  To the moon and beyond.  While also saying that he doesn't expect to live long enough to see a Mars colony become self-sustaining. 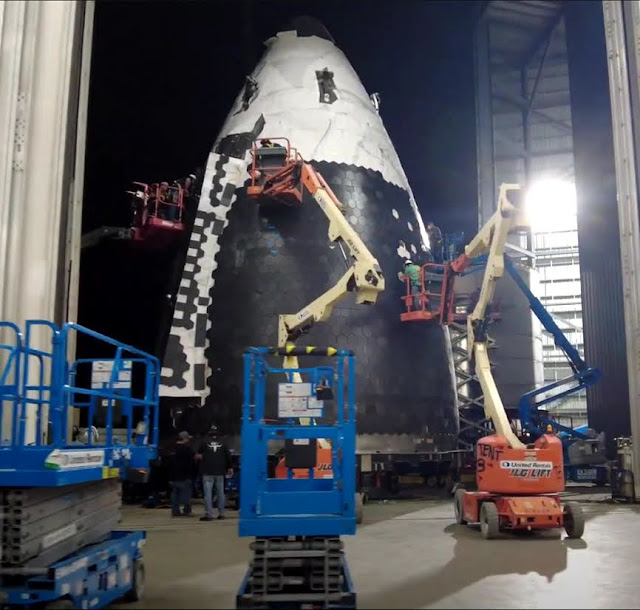 Starship S20 getting work done on its Thermal Protection Tiles.  Those are made not far from me in Cape Canaveral, Florida, at a facility Elon referred to as "the Bakery."  Screen capture from Everyday Astronaut video.