While We Were Having A Weekend, SpaceX Was...

While we were having a weekend SpaceX was doing their version of going "where no man has gone before."  In this case, doing a few things no one has ever done before.  These are absolutely necessary steps for the first attempt at an orbital flight of Starship and the Super Heavy booster.  I don't know which part is most important but they're all important.

First, they lifted the Orbital Launch Table onto the OLP or Orbital Launch Pad, the six-legged structure that's been in process for almost a year.  The two big cranes, Buucky and Kong, lifted the table into place where the final assembly was worked on. 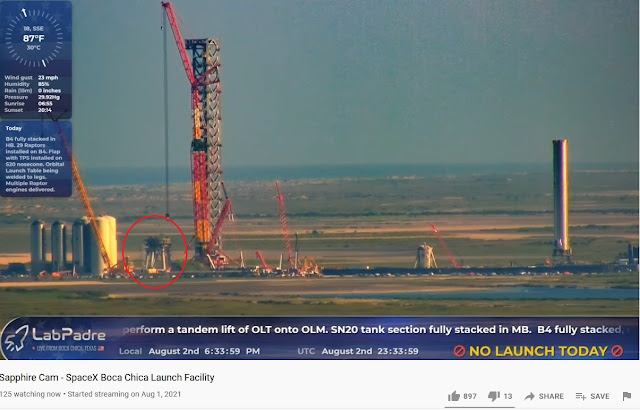 I highlighted the structure with a red circle.  I don't think the work on the table is complete, but it's standing on its own, with nothing attached to either crane.  Kong's cables and attachment point are visible above the OLT/OLP and Buucky, the large yellow crane, is pointed in a different direction.

The other large story is that Booster 4 made a huge leap towards being ready to fly.  In one of what most be the most surprising tasks they've taken on, starting yesterday, all 29 Raptor engines were installed on B4 between Sunday night and this morning, the final two being put in place by the day shift this morning.

After accepting delivery of five new Raptor engines earlier the same day, Super Heavy Booster 4’s (B4) first Raptor rolled out of one of SpaceX’s Starship factory tents around 6pm CDT to form what would become a line of engines awaiting installation. One by one, Raptors were rolled out of that tent and by 5am CDT, an incredible 25 engines had been spotted and installed on Super Heavy. Come shift handoff around 6am, 27 Raptors had reportedly been installed in 12 hours. The two remaining engines likely joined them an hour or two later, marking 29 high-performance rocket engines installed in just 12-14 hours. 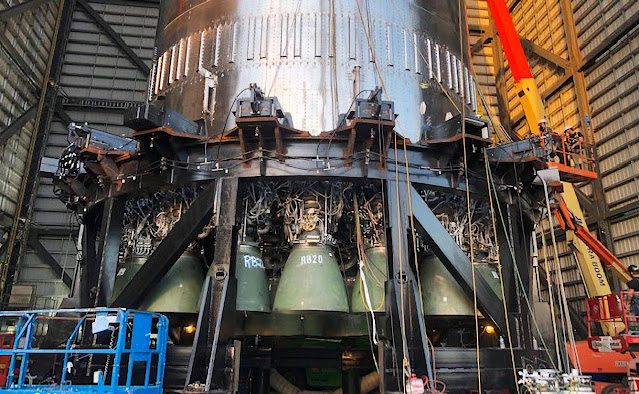 That's a busy looking area!  We don't know what the plans are for how much thrust they're going to try to set for this mission, but it's potentially the most powerful launch in history.

It's possible that B4 can be transported to the Orbital Launch Pad as early as tomorrow, August 3rd, but that's just based on what appears to be ready and one Tweet by Musk in response to a NASA Spaceflight.com picture of the Table and Orbital Launch Pad being worked on.

Needs to be level & match booster fittings. We will find out on ~Tuesday.

It's also worth noting that the Grid Fins for B4 were installed over the weekend as well.   These are not cast titanium like the Falcon 9's grid fins, but welded steel.  They aren't retracted down parallel to the booster's body during the mission, but are rotatable for control purposes.  There's a worker visible in the upper right, behind the black crane or lift.  If that guy is in the range of about 6' tall, the grid fins look to be the length and maybe width of a small car.  Those fins are going to support the weight of the booster when it's recovered out of the air during descent after the flight. 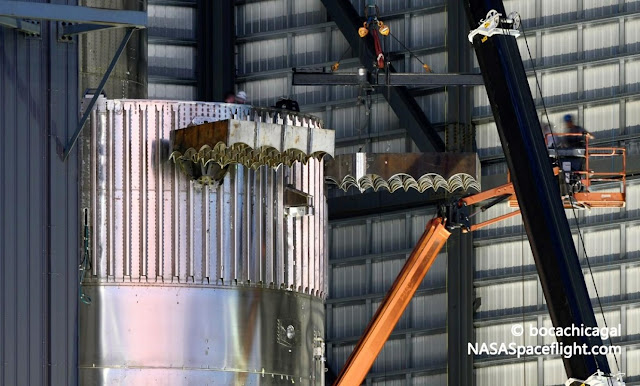 Photo credit to BocaChicaGal at NASASpaceflight.com - as usual.

Back in May, SpaceX had reported they had a goal of completing the first orbital mission of Starship in the "third quarter."  This isn't a government job and they didn't mean the third quarter of the Fed.gov's fiscal year, April through June, but the calendar third quarter: July through September.  July is over and we can sense the urgency to meet their self-imposed schedule of this quarter.  August or September?  Good question.  I'll be watching.