During Monday's road closures that I talked about on Saturday, what they rolled to the launch complex area was a new thing and not anything I expected.  For the first time, it appears that SpaceX has built a test version of the several tanks they've built for Ground Support Equipment something they've never done before.

Known as a ‘test tank,’ the relatively small steel structure was fairly rapidly assembled from parts of an older Ground Support Equipment (GSE) tank scrapped in July over the last week or so. SpaceX completed the first Starship-derived propellant storage tank in April 2021 and rapidly rolled that tank (GSE1) and a second (GSE2) from the build site to the orbital launch pad just a few weeks apart. Less than a month after that, SpaceX also completed GSE tank #3, though things seemingly devolved into chaos immediately thereafter.

Only three months later would GSE3 finally be transported to – and installed on a concrete mount at – Starship’s first orbital launch site, and only after a number of structural modifications and in the footsteps of GSE tanks #5 and #6. Little is known about why SpaceX’s custom GSE tank production faltered so soon after it began, why none of the five Starship-sized tanks installed at the orbital pad have been fully plumbed or subjected to any kind of testing, or why structural modifications were seemingly required after the fact. However, it’s safe to say that SpaceX’s brand new GSE ‘test tank’ is now at the center of the mystery. 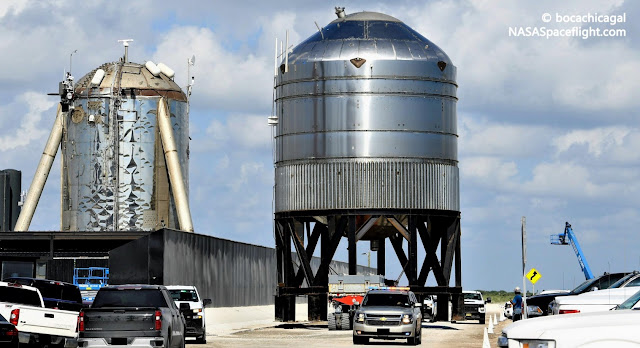 The test tank being rolled into the launch complex, passing "Hoppy," the first of the Starship prototypes to take a 500 ft hop, August 27, 2019.  Photo credit listed in the picture, to @bocachicagal at NASASpaceflight.com.

All of this leads me to speculate that there might well be tests of this test tank during the road closures Wednesday and Thursday evening, 5 to11 PM CDT (Tuesday's road closures were cancelled) and no tests of Booster 4 (B4) or Starship 20 (S20).  Considering how much of this GSE infrastructure SpaceX has built without going through testing like this, it seems like there would have to be a lot of rebuilding if they find their tanks aren't up to the job.