Booster 4 is in the launch complex at Boca Chica. 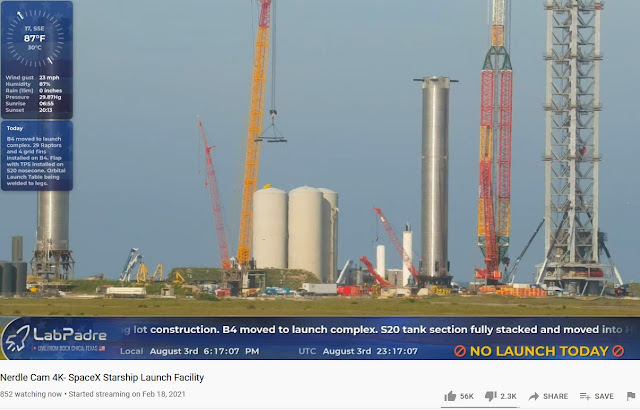 Screen capture earlier this evening.  Booster 3 is on the left side of the screen (behind the blue field carrying text) but up on the test stand while B4 is right of center, still on the transporter, and next to the crane likely to lift her onto the Orbital Launch Pad.

Hoppy flew two years ago this month.  August 27,  2019.  Hoppy is off to the left of this view.  It's mind boggling that we've gone from the "Flying Grain Silo" (formally named Starhopper) to the cusp of an orbital flight of the full Starship Superheavy in two years.  It would be great to see that flight by the 27th of the month.

Over here on the Space Coast, Boeing's Starliner capsule test flight was scrubbed today.  The mission is tentatively scheduled for tomorrow, Wednesday the 4th, at 12:57 PM EDT, but that's far from sure.  From Boeing's Starliner website:

During pre-launch preparations for the uncrewed test flight of the CST-100 Starliner spacecraft, Boeing engineers monitoring the health and status of the vehicle detected unexpected valve position indications in the propulsion system. The issue was initially detected during check outs following yesterday’s electrical storms in the region of Kennedy Space Center.

We are in wet pattern on the East Coast of Florida this week, with 60 to 80% chances of thunderstorms every afternoon, at least here south of the Space Center.  It's to be expected.  Since the launch moves a little earlier in the day every day that passes (due to the Space Station Orbit shifting vs. time), and the rain chances go down as the week goes by, it might be more realistic to set the date later in the week.  Of course, there have been lots of launches into gaps between the clouds over the years.

More importantly is that associating the "unexpected valve positions" with the previous day's thunderstorms carries an implication that those two events go together.  That the storms may have somehow caused that issue.  Maybe it's a reach, but that needs to be investigated if they haven't ruled it out.

EDIT 04 Aug 21 1100 AM EDT:  As of the latest updates, the Starliner test flight is scrubbed with no official word of reschedule.  Official words at Starliner Updates but it still revolves around not understanding why the "unexpected valve position indications in the propulsion system" were seen.