The Most Interesting Rocket Flight Abort

Astra is a rocket company that we've talked about several times; the most recent launch coverage was back in December '20 of a rocket that made it into space but ended up about 500 meters/sec (about 1100 mph) too slow to achieve orbit.  They had made the statement that if they had launched from the Cape, where the Earth's rotational speed helps the horizontal component of velocity much more than it does at their Kodiak, Alaska, launch complex they would have made orbit, but they made the launch vehicle about five feet longer to hold more fuel and oxidizer.

They had announced another launch, and this time renamed what had been Rocket 3.2 in December to Rocket 3.3.  Since it was to be watchable on YouTube, I opened a Firefox tab on Friday and they scrubbed.  Yesterday they had the most interesting launch abort I can recall.  Scott Manley does a great video on the story, and let me add a screen capture of one of the most unusual parts of this launch failure. 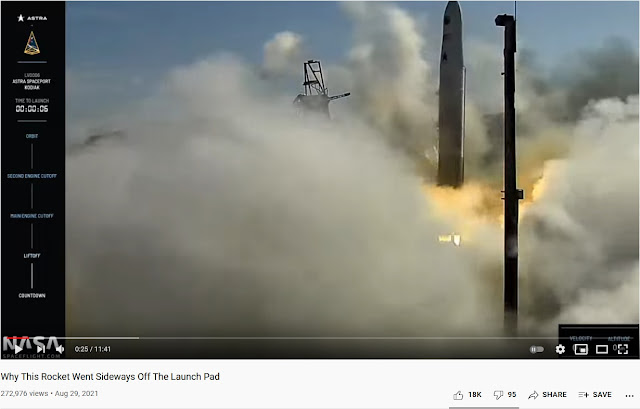 The video title tells you what you may not know by looking at the picture, but at this point, the rocket had just recovered from tilting toward the right; the control systems had corrected the thrust vector to get the rocket upright, but it was still moving sideways to the right and out of view.

What happened was that one of the engines failed very early on, and the remaining engines didn't have quite enough thrust to get the rocket moving up.  It was a thrust to weight ratio of almost exactly 1:1.  As the rocket was burning fuel, though, that was reducing the weight and the vehicle soon starts moving upward.

I have to marvel at the fact that they didn't blow the rocket up right then and there, but the bigger picture is that they never blew it up.  That was apparently for a couple of reasons: first was to get as much data as possible on how every system reacted, and second was to make sure if the booster blew up on its own that the debris fell into the ocean and not onto land there in Alaska.  OK, maybe the order of those two is reversed; first was they didn't want to clean up a mess from it crashing onto land and second was to get as much data as they can.

Astra is probably not in trouble.  They've gotten $3.9 million from NASA and are now a publicly traded company.  People are invested in their stock.  After this failure, CEO Chris Kemp appeared on video to give the news while standing in front of their seventh rocket.  Note: that link is to a time tag in the Scott Manley video, not a separate video.

This is why people refer to rocket science as being hard.  Rockets are hard.  Orbit is harder still.  I'm sure someone would like to point out that by missing reaching orbit by 1100 mph, Astra has still gotten much closer to orbit than Blue Origin.