I'm falling down on the job in not reminding everyone who might want to comment on the ATF's Notice of Proposed Rule Making 2021-R05 that the deadline is August 19th - today for most of you who will read this on Thursday.

This is the one that claims it's going to clarify the definitions of receivers, frames, and firearms, as well as the definitions used with incomplete guns finished at home; the so-called "80% guns."  That number is PFA and has nothing to do with the number of operations left to do as opposed to how many there are starting from chunks of metal.

My emphasis from the start back in May has been on the Personally Made Firearms (PMFs) or 80% guns.  The introduction to the NPRM promises to clarify what "readily converted" means in their allowing these to be sold as long as they can't be "readily converted to fire a projectile."

It clarifies nothing.  It simply provides us a matrix of things that go into determining what the word means but with no specific numbers for what constitutes “readily.”  They include a long footnote including different rulings from courts on guns that were "readily converted" that ranged from taking less than an hour for a person with no specialized knowledge up to "eight hours in a properly equipped machine shop."  I can agree that if someone who can barely handle a battery powered drill can do it in less than an hour, that's readily converted, but the other extreme is light years from "readily" to me.

Exactly where the line should be between the number of minutes it takes Homer Simpson with a cordless drill and an eight hour day in a well-equipped machine shop is what they should be telling us, but they don't.

The only legal case they mention that was not ruled as not readily converted was done by a Master gunsmith with $65,000 worth of tools.  I'm not sure what qualifies one as a Master, but does five years sound reasonable?  Full time (40 hour weeks) for a year is 2080 hours so round five years to 10,000 hours of experience, plus maybe another 2000 hours of training, and a commercial investment in tools.  I can agree that's not readily converted, but if the tools get cheaper, where's the line?  $50k?  $35k?  Again, they don't say.

In last December's action against Polymer80 for selling a "Buy Build Shoot Kit," it seems that ATF used "convenient" as the working definition for "readily converted."  According to the Wall Street Journal:

The probe focuses on Polymer80’s “Buy Build Shoot Kit,” which includes the parts to build a “ghost” handgun. The kit, which Polymer80 sells online, meets the definition of a firearm, ATF investigators determined according to the warrant application. That means it would have to be stamped with a serial number and couldn’t be sold to consumers who haven’t first passed a background check.

This turns the question into how inconvenient does ATF want the process to be?  Is it acceptable to order the frame from Polymer80 and the parts to complete it from Midway USA?  Do we need to order the internal parts as one part per vendor; buying from 10 or 20 vendors instead of just one?  How about if between every step we have to go run around the block?  What's that, ATF?  Between every step we need to crawl across Death Valley on our hands and knees?

Conveniently packaged is just as nebulous a concept as readily converted.  We should get precise, repeatable definitions.  Instead, for everything we get the crutch of tyrants everywhere: we'll know it when we see it, because we're the experts.

The rest of the NPRM is just as bad.  The Gun Owners of America puts up a video arguing that a strict interpretation says that a plain old, stock, Glock 40 can be interpreted to contain 16 ATF regulated firearms.  That means that in the event you need to replace a part in any one of those subassemblies that you'll need to fill out a form 4473 and pay for a background check.  It sounds to me that means that if you need to replace a $1 part, you will be paying around 30 to perhaps $50 to get the part shipped to an FFL and your background check.

Which, of course, is the point: to make gun buying and ownership so onerous that many people will just refuse to take part.  That's been the trend since at least the 1968 Gun Control Act, if not the 1934 NFA.

Commenting is easy.  Go to Regulations.gov and enter the NPRM number (NPRM 2021R-05) in the search bar at the top.  I think there were two items returned but one wasn't the actual NPRM.  Once you click on the NPRM, you get a form where you can either enter a comment or attach a document you've written already.  It's said that polite, original comments matter more than things that they've seen copied a hundred times, but that option is also available at a GOA Comment Site, too. 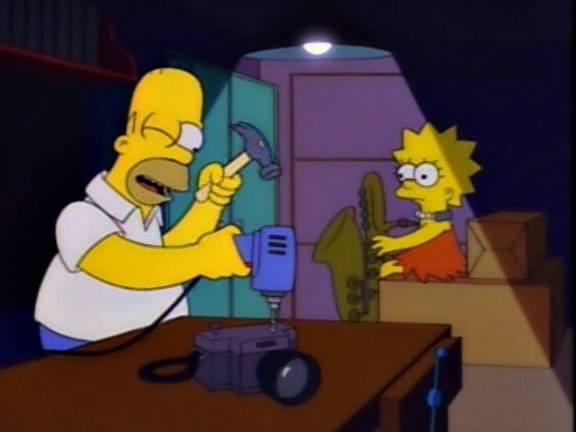 Hey, it's Homer with a drill!  OK, he's working on a camera and not an AR Lower, but I worked my reference to him into the picture.