A Big Week in Starship News

In the last couple of days, three big stories have shown up about SpaceX Starship mission plans.  All three stories are on Teslarati, a pro-Tesla and SpaceX website that doesn't appear to be actually owned by them, so the stories aren't official SpaceX releases of info.  They seem to use Twitter for that.

The first story is that in a response to a direct question, Elon Musk tweeted that an unmanned Starship flight to Mars with intent to land in 2024 "is not out of the question."  Remember that Earth and Mars are in their closest approach roughly every 26 months; the current crop of probes to Mars were launched in the summer of '20, roughly mid-July through mid-August.  They arrived roughly eight months later.  The next optimum launch window will be in 2022, more like September/October.  Musk seems to be talking about having Starship and all the necessary infrastructure ready by 2024, around the end of the calendar year.

It's worth noting that Musk is on record saying he thought they could make next year's (2022's) launch window.  Missing this schedule isn't due to simply a bit of underestimating the problem; it included starting the program over again from scratch.  Quoting Eric Ralph at Teslarati:


For SpaceX, that two-year ‘delay’ is more impressive than anything given that the company practically restarted Starship development from scratch a year after Musk set the 2022 target. In late 2018, after more than two years of work developing a Starship (then BFR) built out of carbon fiber composites, the CEO revealed that the company was going to completely redesign the rocket to use steel for all major structures.

Two and a half years after that decision, SpaceX has built a vast Starship factory capable of building at least one ship per month, cumulatively fired dozens of full-scale Raptor engines for more than 30,000+ seconds, flown eight full-scale prototypes, and recovered the first full-size Starship in one piece after a high-altitude launch and bellyflop-style descent and landing.

On orbit refueling is the most important technical infrastructure that SpaceX is going to need to travel to Mars.  Because of that, I suspect that the "begins work" portion of that headline is probably only true in the sense that they've begun using an account linked to that NASA award, for accounting purposes only.  My guess is that the actual work on how to do refueling has been in some stage of research for quite a while. 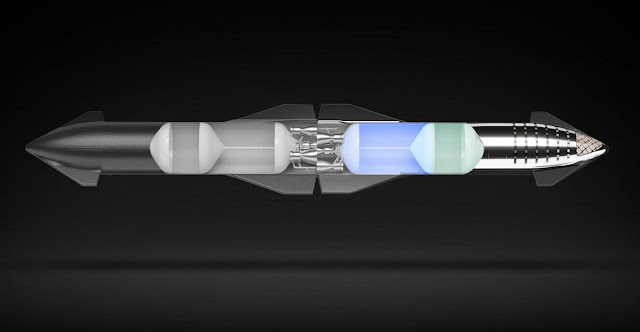 I've seen this diagram several times and I can't picture the fuel flow between the Starships.  There's no hardware there to connect them.  SpaceX illustration.


Ultimately, US Federal Procurement Database entries show that NASA ultimately procured $50.4 million for SpaceX’s propellant transfer demonstration, began disbursing funds ($15.1M) on May 4th, 2021, and expects SpaceX to complete work by the end of 2022. It’s unclear if NASA expects SpaceX to recover the Starship involved in the test.

This week's story that would ordinarily be the lede is that SpaceX has revealed the first concrete details about Starship and Super Heavy’s first orbital flight test.  The details are in a mandatory filing with the Federal Communications Commission to authorize them to communicate with the vehicles during the mission.  The filing itself is here, and downloads as a .pdf.  Telemetry radio frequencies are listed.  The document includes milestones, by second, into the flight.


The time of the Starship soft landing is around 90 minutes after launch, which sounds like a single orbit.  It's not clear if they intend to have a recovery drone NW of Kauai, Hawaii or if they're going to just splashdown into the Pacific.  Eric Ralph at Teslarati believes both the Super Heavy booster and Starship prototypes will be dumped in the water.

The "third quarter" launch date apparently refers to the third calendar quarter, not the third quarter of the Federal fiscal year.  That means their window opens July 1st and extends through September 30th.  Super Heavy Booster Number 3 has started stacking and is far enough ahead of what they're calling BN 2.1 that the latter must be a test tank or something out of the main flow.  Still, they've never done any of the launch pad testing: cryogenic tests, static fires, nothing on a Super Heavy booster.  They've never stacked a Starship on a Super Heavy booster.  I expect this mission will be toward the end of the quarter.

Finally, I note that SN15 has been put back on a test launch stand today.  The major effort in the area is construction of a large crane, visible here - the red crane on the right and the horizontal yellow arm being attached to it. 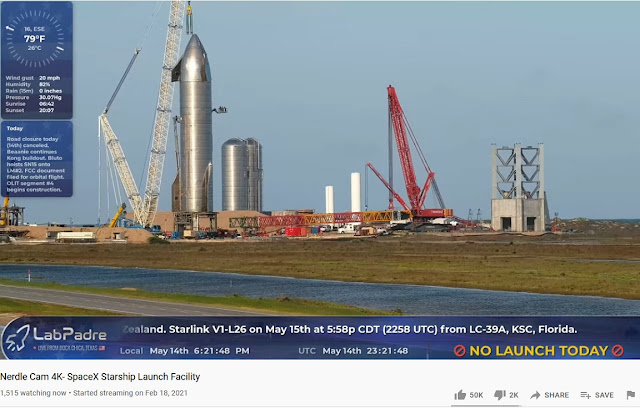