Zero Hedge had the story this morning that ought to send chills up all of our spines.  The setting is that the Bank of America has earnings calls with many businesses they work with (as you'd expect), and they note the number of mentions of "concerns about inflation" they hear mentioned.  In their first calls in the previous two weeks, the number of mentions of concerns was up 400% year-over-year (YoY).  That was more than triple the YoY per company so far, the and the biggest jump since BofA started keeping records in 2004.  This week they needed an even bigger chart.  The YoY increase in mentions of "concerns about inflation" reached 800% YoY shattering the week-old record. 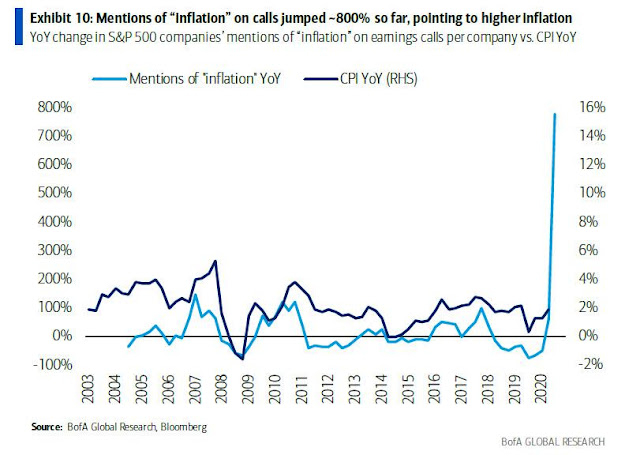 BoA issued an oddly-worded message in a report, which ZeroHedge presented and I'll repeat:

What exactly does transitory hyperinflation mean?  Haven't all episodes of hyperinflation been transitory?  Weimar Republic, Zimbabwe, currently Venezuela... Countries undergoing hyperinflation either restructure their economies (usually several times) to end it, go to war, or they collapse (or some combination of those) right?  In the broader sense, isn't everything that happens in the world transitory?

I find this an interesting time to post this due to the posts this past weekend by both Bayou Renaissance Man and Area Ocho about inflation showing up everywhere now.  I did a post about inflation being here on April 2nd (although my intent was to ridicule Modern Monetary Theory) and included a graphic from Reddit with a summary of inflation numbers. 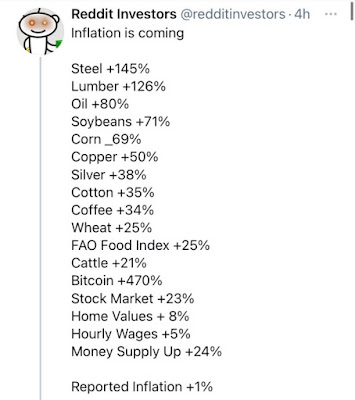 There's advice for dealing with inflation virtually everywhere.  If there's something you need and you believe your income prospects are not likely to be destroyed, it's cheaper now than it will be next week, next month or next year.  Yes, that means stockpile food and supplies while you can.  Yes, that argues to buy anything now, something which can act to further push up prices (not to mention that I don't want to start another run on toilet paper, or any sort of food).  Back in the raging inflation of the '70s, when the dollar was in free fall due to getting off the gold standard for good, it was pretty commonly said that if you needed something you might finance, like a car, not only would the car be more expensive soon, but you'd be paying it off with dollars that were worth less to you if your job held up.  (Many of us remember getting the maximum raises our employers would pay for years in the '70s).

Is this the final push to destroy the US or just the idiocy of virtually doubling Federal Spending and going to extremely deep deficits?  Maybe it's just that the economics of the last four thousand years are more right and Modern Monetary Theory is going to cause a total collapse?  Got me.  From the practical standpoint it just doesn't matter very much.

Just keep an eye out, keep your head on a swivel, and be careful.