SpaceX Changes Their Mind - SN15 Has Been Retired

Since the start of May, after SN15's successful test flight, we've been under the impression that SpaceX was going to re-fly SN15 "soon."   All of that apparently changed in the last several days.  First we heard that one Raptor engine had been removed, then we heard that all three Raptors had been removed.  Last night, I noticed that one of the two, new, very large cranes (the yellow Liebherr crane in the center here) had hooked up to the nose cone of SN15.  Today around midday, the crane lifted her off of the test stand and onto a multi-axle transport.  That was puzzling.  Then in the evening East Coast time, SN15 was gone. 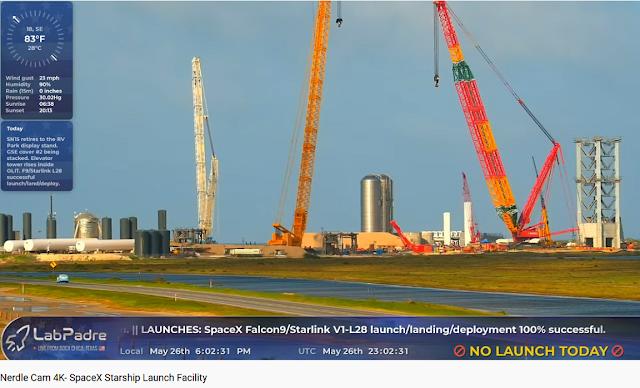 You can read in that blue bar on the left of the image that it says "SN15 retires to the RV Park Display Stand."  I didn't even know there was an RV Park.  But that's apparently SN15's new place; as a memorial to the fact she was the first one that "sticks the landing and keeps on standing" (to channel my inner John Cameron Swayze, Timex Salesman).

So now what?  I've seen nothing in particular that's official.  As I said a few days ago, the emphasis seems to have switched to preparing support for the first orbital flight of a Starship and Super Heavy in the third quarter.  In that picture of the launch complex, you can see two large fuel/oxidizer tanks; Ground Support Equipment (GSE) for Starship and Super Heavy missions.  Near the right edge, you can see the Orbital Launch Integration Tower (OLIT), and if you look about halfway up the metal portion, you can see some rails and hardware where base section 1 joined section 2.   Sections 3 through 5 are being assembled now in the Shipyard area, near the High Bay.  The crane on the left is the most experienced crane in the launch complex, the one we've called Bluto.  The tall, yellowish one is the Liebherr crane and the one on the right, is the most recent addition, named Kong by the people who hang out on the Lab Padre camera chats (called nerdles).

The High Bay itself currently is housing both Starship prototype SN16 and the beginnings of stacking Booster Number 3.  BN3 is expected to be the first Super Heavy to fly, although no one knows exactly what that means (officially); will they try to land it on some sort of legs or will they try to catch it by the grid fins as Musk has proposed?  The first Starship prototype to fly to orbit is expected to be SN20, which is also currently under construction.

If I had to guess, I think they'll fly SN16 if any improvements were made after the data from SN15 was analyzed.  Based on how long prior vehicles took, SN16 could fly by the end of June.  If SN16 isn't necessary, we may not see anything flying for a while.