Recently, Blue Origin announced that they were going to auction off the first seat on their new program of rides for hire that would take passengers to 100 km, above the Kármán line and officially into space, and experience a period of weightlessness.  The current high bid in the auction for the first passenger seat on the New Shepard suborbital mission is $2.8 million.  Two days ago, it had just broke $2 million.

That's for one seat, out of the six seats on the New Shepard.  That first launch is tentatively set for July 20.  Blue Origin has not said if any of the seats are already assigned, or if Jeff Bezos will be riding with the lucky bidders.  Ars Technica reports:

The unsealed online auction for this seat will continue until June 10. Then, on June 12, the company will hold a live online auction among verified bidders to finally sell the seat. The company said the winning bid amount will be donated to Blue Origin’s foundation, Club for the Future, to inspire future generations to pursue careers in STEM and help invent the future of life in space.

Beyond this auction, Blue Origin has not released pricing for New Shepard flights—either for individual tickets or for an entire mission. However, a well-placed source told Ars that the per-seat price would be "well north" of $500,000 and much closer to $1 million for the first several flights.

To be honest, when I saw they were going to auction seats, I assumed they didn't really know what to charge and did an auction to get an idea of what the first few were willing to pay.  To borrow a term from sales critters, so they don't "leave any money on the table."  I have no idea what those flights cost, so no idea of what the break even cost for a seat would be.

The current bid above $2 million speaks to the demand for suborbital spaceflight — passengers on New Shepard will experience the thrill of a rocket launch and several minutes of weightlessness—as well as the cachet of flying early in the program.

With New Shepard, Blue Origin will be charging well above the original price, $250,000, that competitor Virgin Galactic charged for seats on its suborbital space plane. This may be partly because New Shepard will go above the Kármán line of 100 km, compared to about 80 km for Virgin Galactic.

It may also be partly because Virgin Galactic's Unity spacecraft isn't flying.  Another article on Ars Technica says Virgin Galactic is troubleshooting an EMI problem (Electromagnetic Interference) that caused the control computers to halt ignition of the engines on their last test flight.  A test flight is currently scheduled for tomorrow, May 22, pending weather and the usual stuff.  It's not likely Virgin Galactic will be flying paying customers until 2022. 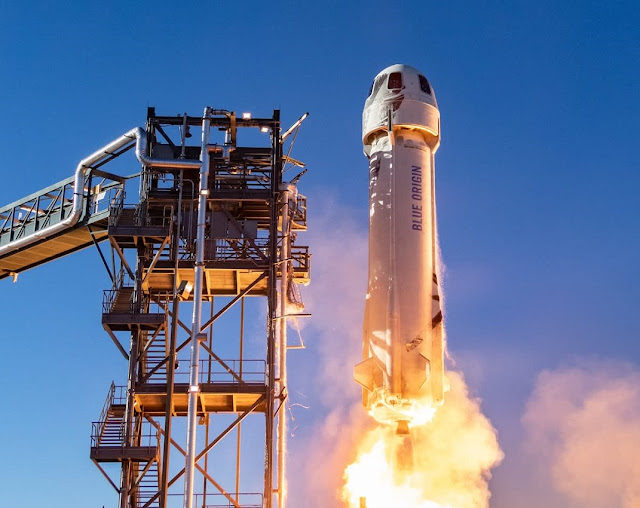 Meanwhile, since the flight of SN15 and talk about re-flying it "soon," operations at SpaceX Boca Chica have been focused on building infrastructure, and building the cranes that will build that infrastructure.  A structure called the Orbital Launch Integration Tower has been the emphasis.  It is currently one tower-like structure on a large concrete base.  A second section was brought to the launch pad area today to stack on top of section one, and there are at least two more sections over near the High Bay. 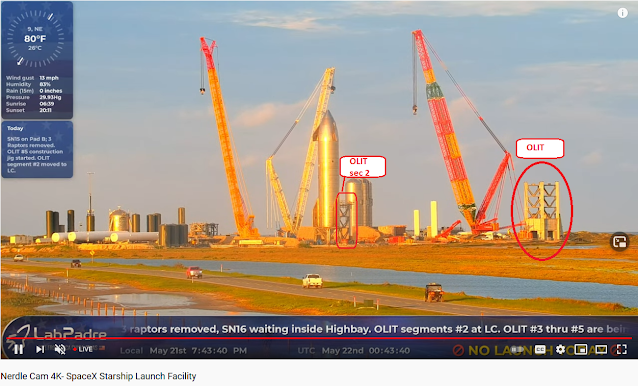 The two big cranes have been built and the second (on the right - called Kong by the Lab Padre nerds) was cranked up to that position for the first time today.