Stop me if you've heard this kind of story about government contracts.  Last Monday, it was announced that Blue Origin was filing a suit against NASA for awarding the Human Landing System contract exclusively to SpaceX.  Seemingly within moments, the other competitor in the three-way decision, Dynetics also announced a lawsuit for not being chosen to develop the HLS. Elon Musk's response on Twitter was quintessentially Elon Musk.

There are times I think some 13 year old boys are running the engineering at Tesla and SpaceX.  This fits that idea.  On the other hand, he's right.  Neither Blue Origin or Dynetics has launched anything to orbit.  Dynetics is relying totally on subcontractors; Blue Origin is supposedly doing it themselves, with the New Glenn, the only rocket currently able to compete with the Space Launch System for the coveted "Most Delayed" award.

In the world of big government contracts, such suits seem to have become the norm in the last 20 years; maybe farther back.  I've been in companies that get the contract and then have to holdup starting work until the legal actions are resolved.


That means that NASA is now legally unable to use funds or resources related to its Human Lander System (HLS) program or the $2.9 billion contract it awarded SpaceX on April 16th to develop a variant of Starship to return humanity to the Moon. However, just like SpaceX has already spent a great deal of its own time and money on Starship development and – more recently – a rapid-fire series of launches, the company appears to have no intention of letting sore losers hamper its rocket factory or test campaign.

Don't get me wrong; it's good in principle for the competitors to be able to verify that the contract was awarded in keeping with the rules everyone was working to.  Further, I think the tendency for these contract awards to generate these protest lawsuits is a nature of the relentless push of companies to look good in this quarter's bottom line; after all, since we pay executives in stock options and other things to avoid the "millionaire's tax", it's only a natural (perhaps unintended) consequence that they would seek to optimize the stock options.  The government contracts are so big that they mean lots to the survival of all of the companies.  Eric Ralph at Teslarati notes:


The primary argument is generally shared by both protestors. In essence, Dynetics [p. 23; PDF] and Blue Origin [PDF] believe that it was unfair or improper for NASA to select just a single provider from the three companies or groups that competed. They argue that downselecting to one provider in lieu of budget shortfalls changed the procurement process and competition so much that NASA should have effectively called it quits and restarted the entire five-month process. Blue Origin and Dynetics also both imply that they were somehow blindsided by NASA’s concerns about a Congressional funding shortfall.

Blindsided?  They can't be stupid enough to not know that funding shortfalls are likely in a program that isn't climate change or New Green Deal-related.  At the time of the award, I recall posting that NASA said it needed $3.3 billion in funding for this fiscal year to meet the goal of landing humans on the Moon by 2024. Congress provided just $850 million, and as a result, NASA acknowledged that 2024 was no longer a realistic target.  They would have rather had more than one contractor but couldn't do it on just over 25% of what they needed.

A commenter over on Teslarati's article posted this visual (actually three or four commenters did): 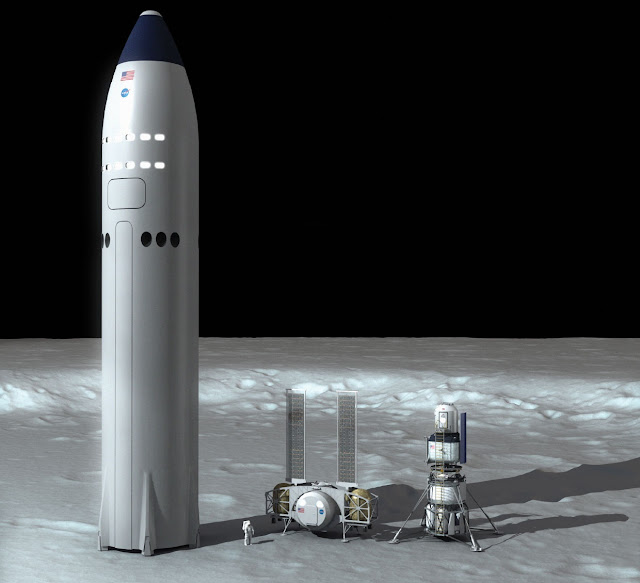 Left to right, SpaceX, Dynetics, Blue Origin.  The lander on the left was bid at $3 Billion less than the cheaper of the other two.

Things that make you go, "hmmm."

It might be worth quoting Eric Berger (from Ars Technica) who tweeted, "I’ve been told that Jeff Bezos is livid about this, and views overturning the HLS award as a top priority for Blue Origin."  It kind of feeds the story being circulated that Jeff Bezos has a personal grudge against or rivalry going with Elon Musk.