The news came out today that inflation is up again, month over month, year over year.  The official line is that the Consumer Price Index (CPI) surged ...


The annual CPI figure surged to 4.2%, the most since 2008 though a figure distorted by the comparison to the pandemic-depressed index in April 2020. This phenomenon -- known as the base effect -- will skew the May figure as well, likely muddling the ongoing inflation debate.


Ignoring the reference to the comparison being to the very flat year of the Kung Flu last year, the problem with that 4.2% year over year inflation number is that it's a lie.  If you shop for food you know it's a lie.  In a couple of things I've tracked, I've seen prices up 30% since last year.  Even the numbers we reported last week show much more than a 4.2% rise in most things.  If you have to fill your car once a week to go to work, you know it's a lie.  It's an idea that has been on this blog as long as I've been here.  The officially reported CPI doesn't include food or energy because, "they're too volatile" - as if we can skip buying food or fuel because it's inconvenient.  They're two of the most important costs of living, yet the official numbers don't include them.

The website Shadowstats has been routinely re-calculating the inflation numbers using the ways they were calculated in the Jimmy Carter years (until 1980) as well as the way inflation was calculated in 1990.  They say the inflation is almost three times that 4.2% value being reported.

Shadowstats has a page with plots of Consumer Inflation based on 1980 and 1990.  You'll note that the inflation rate has stayed in the vicinity of 10% since 2001.  There are some periods where the inflation rate drops as low as 5% (the 2008 'Great Recession') but it has stayed remarkably close to 10%.

This is all remarkably like the Jimmy Carter era; this week's addition of lines of cars at gas stations, with the stations out of gas or restricting purchases is very reminiscent of the '70s for me. Then we look at the middle East, the emboldenment of Iran, the attacks by Hamas on Jerusalem (paid for with the money Biden sent Iran) and it really resembles the Carter era.  We don't have an embassy in Tehran for them to raid and capture now, so at least we have that going for us.

Maybe that's what that famous picture was about last week.  Maybe Carter2 was visiting Carter1 for some advice on how to screw up the world more thoroughly. 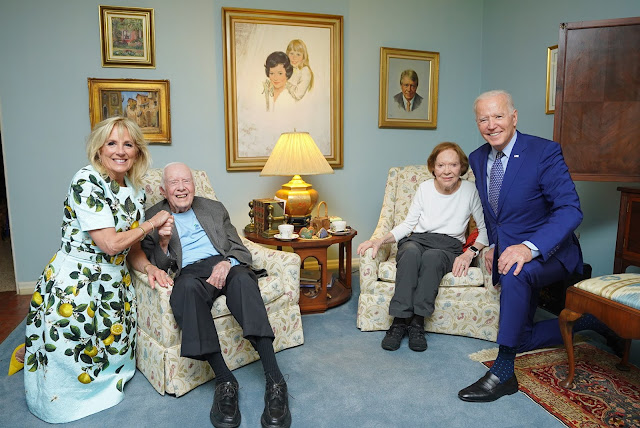 This is not my picture. But you knew that.