The detonation of the first atomic bomb in the White Sands area near Alamogordo, New Mexico in 1945, produced levels of heat, pressure and radiation that had never occurred on Earth.  The levels of  temperatures and pressures were so extreme that the surrounding sand fused into a glassy mineral called trinitite - after the Trinity test that formed the new mineral.  According to a new paper published in the Proceedings of the National Academy of Sciences, a previously unknown quasicrystal has been discovered in a sample of trinitite from near the steel tower holding "the gadget" (as the bomb was known) in the air above those sands.  From the PNAS article:


This article reports the discovery of a heretofore unknown icosahedral quasicrystal created by the detonation of the first nuclear device at Alamogordo, NM, on 16 July 1945 (the Trinity test). Like all quasicrystals, the new example violates crystallographic symmetry rules that apply to ordinary (periodic) crystals. It was found in a sample of red trinitite, a combination of glass fused from natural sand and anthropogenic copper from transmission lines used during the test. The new quasicrystal is the oldest extant anthropogenic quasicrystal known, whose place and moment of origin are known from the historic records of the Trinity test. The thermodynamic/shock conditions that formed it are roughly comparable to those that formed natural quasicrystals recently found in meteorites. 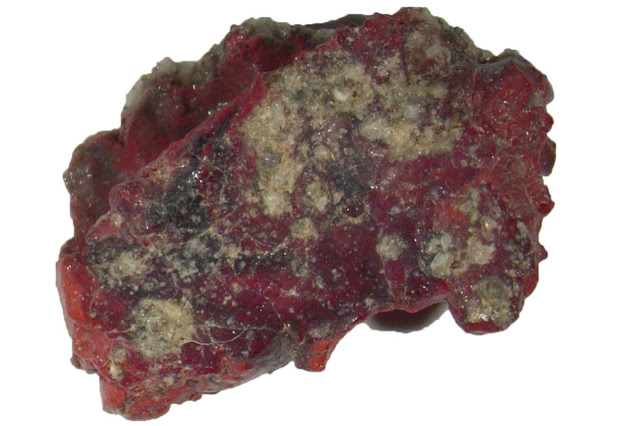 Quasicrystals are a relatively new discovery, and many people have never heard of them.  Crystals, by definition, have a precisely symmetrical ordering of atoms in periodic patterns that repeat over and over in a 3D lattice.  They are among the finest examples of the beauty of mathematical order in the natural world.  Quasicrystals, by contrast, clearly follow mathematical rules, but each cell has a slightly different configuration of cells nearby rather than repeating in an identical pattern. It's that unique structure that gives quasicrystals their unusual properties. 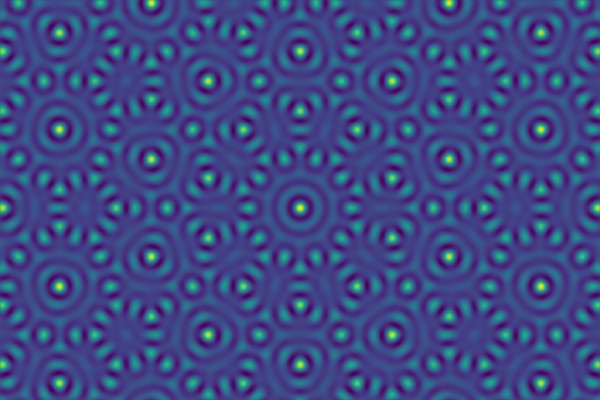 The story of the discovery of quasicrystals is such a good example of the arrogance of science toward alternative theories that I've touched on it twice in the history of this blog, first in 2011 and then in 2014.  The story starts with a young Israeli scientist named Daniel Shechtman examining an aluminum-manganese alloy with an electron microscope in 1982.


Shechtman noticed an odd, aperiodic diffraction pattern: a seemingly impossible tenfold symmetry. As the story goes, he muttered to himself, "Eyn chaya kao" (Hebrew for "there can be no such creature") because it was in clear violation of the known rules of crystallography established over 150 years before.

A major break in the study of quasicrystals took place in 2008 when another scientist, Princeton physicist Paul Steinhardt, was examining minerals from the collection of the University of Florence.  He observed the telltale aperiodic symmetry in a meteorite that had landed in the Koryak Mountains in Russia.  Steinhardt organized an expedition to where the meteorite impacted and found more samples with the quasicrystal structure.  Steinhardt and colleagues took a sample of copper-aluminum alloy—similar in composition to the icosahedrite found in the meteorite—put it into a test chamber, and shocked it with a tantalum capsule to produce the equivalent of 200,000 atmospheres.  They were able to produce the quasicrystal pattern seen in the meteorite samples.

Between 1982 and 2008, Shechtman's career had it hard.  He spent much of his career being vilified and exiled as a crank. “I was thrown out of my research group. They said I brought shame on them with what I was saying.” In 2011, he was awarded the Nobel Prize in Chemistry for the discovery of quasicrystals.

The Ars Technica reporter relays that today, quasicrystals are practically commonplace, with over 100 varieties regularly synthesized in the laboratory and used in surgical instruments, LED bulbs, and nonstick frying pans (although she doesn't give any trade names that could help us remember if we've seen them).   The article contains some more highlights of the scientific advances associated with quasicrystals, which are now leading the possibility of designing or engineering quasicrystals for specific purposes.