I've had a train of thought running for a few days prompted by some articles I've come across.  Leave it to Borepatch to find the definitive article to get this thought flowing.  Borepatch's article is called "The Wages of Pseudoscience" and links to this piece,  Scientific Heresy, on Bishop Hill blog.  The piece is the text of a speech, the Angus Millar lecture at the RSA (Royal Scottish Academy) in Edinburgh.  RTWT - it is excellent.  He points out that all major advances in science are considered heresies:


Like antisepsis, many scientific truths began as heresies and fought long battles for acceptance against entrenched establishment wisdom that now appears irrational: continental drift, for example. Barry Marshall* was not just ignored but vilified when he first argued that stomach ulcers are caused by a particular bacterium. Antacid drugs were very profitable for the drug industry. Eventually he won the Nobel prize.

Just this month Daniel Shechtman* won the Nobel prize for quasi crystals, having spent much of his career being vilified and exiled as a crank. “I was thrown out of my research group. They said I brought shame on them with what I was saying.”

It is said that the virtue of science is that it is self-correcting, that peer review assures that only good science gets published and the bad science is weeded out.  Sort of a Darwinian gradualism.  But Thomas Kuhn in "The Structure of Scientific Revolutions" (perhaps the most quoted book in science) paints a different picture, more like the punctuated equilibrium theory that some evolutionary biologists hold.  Science is relatively static; new ideas are accepted in infrequent revolutions when old ways of envisioning and approaching problems fall to new ones.  This happens largely when the old scientists who hold those views die off.  Gary Taubes, perhaps my favorite science writer, explains it like this (in a thoroughly unrelated blog post):


..the people who invariably do manage to shift scientific paradigms are “either very young or very new to the field whose paradigm they change… for obviously these are the men [or women, of course] who, being little committed by prior practice to the traditional rules of normal science, are particularly likely to see that those rules no longer define a playable game and to conceive another set that can replace them.”

So when a shift does happen, it’s almost invariably the case that an outsider or a newcomer, at least, is going to be the one who pulls it off. This is one thing that makes this endeavor of figuring out who’s right or what’s right such a tricky one. Insiders are highly unlikely to shift a paradigm and history tells us they won’t do it. And if outsiders or newcomers take on the task, they not only suffer from the charge that they lack credentials and so credibility, but their work de facto implies that they know something that the insiders don’t...


A good rule of thumb is that outsiders challenging establishment science are invariably wrong. And we don’t want our experts and authorities wasting their time vetting every last crackpot theory that arrives over the transom.  [written in] Crayon or not. We have better uses for their time.

And here’s the challenge to both the scientist working in the field and the lay observer following along: how do we tell the difference between the one in a million times, say, that an outsider comes along and gets it right, and the other 999,999 quack-driven attempts? The numbers alone tell us that the best idea is always to bet against the outsider, that we’re always best served by ignoring him or her and getting back to science as usual (what Kuhn called “normal science”). The odds are enormously in our favor if we do so. But, still, when a paradigm is shifted, it’s going to be an outsider who does it, so keeping an open mind is a reasonably good idea, particularly when the evidence suggests such a shift is in order (see aforementioned obesity epidemic).

The low hanging fruit here is Global Warming, um Climate Change or Chaos or whatever they call it this week.  I will ignore this one and talk about water bottles and meat eaters, because the pressure to get published causes the balloon to bubble in different places.

Water bottles?  I imagine you've heard of BPA (Bisphenol A), the plastic hardener that's the current scare among the very, very nervous?   Outdoors magazines and others are recommending we only use plastic water bottles once or twice, to protect ourselves from it.  Columnist Derek Hunter summarizes the situation in "Doomsday Cultists in Science", quoting from this article in Forbes.  The scientist behind the work against BPA is Frederick vom Saal, from the University of Missouri.


His theory depends first on BPA detaching from products made with it and second, it has to enter the body’s blood system. Every scientist not affiliated with vom Saal who tries this finds it detaches in miniscule amounts and that it – to put it bluntly – all comes out in our urine. Even the EPA has given up on this one; a study funded by the agency earlier this year showed that no BPA could be detected in the blood of the overwhelming majority of people fed a diet rich in BPA.

as Henry Miller from Forbes says,


I won’t pretend that there is no debate within the scientific community on this issue.  Whether or not this debate is warranted is another question.  (I believe it’s not).

Hunter, as is his style, is a little more direct:


It turns out there may well be, as Steve Martin said in The Jerk, a profit thing.

According to one conflict of interest statement, vom Saal “consulted for an attorney involved in civil litigation regarding the health effects of BPA.” Another conflict of interest statement from 2008 showed that vom Saal had been, “serving as a consultant for in-preparation litigation regarding BPA; serving as chief executive officer of XenoAnalytical LLC, which uses a variety of analytical techniques to measure estrogenic activity and BPA in tissues and leachates from products.”

Keeping the press attacks up on BPA is sure to create more profit for vom Saal.  The fraud, unfortunately, is going to alarm many who are unable to filter the experiments well enough to make sense of them.  Young mothers unnecessarily worried about baby bottles.

I found earlier this week that a Dutch social psychologist admitted to extreme fraud in studies that stated "Meat Eaters are Selfish and Less Social".  Researcher Diederik Stapel was first suspended under suspicion in September, and by the end of October, investigators ...


...concluded that Stapel fabricated information in at least 30 publications and many other articles are still being poured over. They are quoted by DutchNews describing this as “considerable and shocking.”

Unfortunately, this doesn’t just have an impact on him but also many of his former students whose names were associated with many research papers that have now been called into question. They found that 14 of the 21 doctoral dissertations he supervised were fake as well. He even made up the existence of one student who supposedly collected and organized the data.

That the discredited doctor and his coauthor were both vegetarians might have led to a little confirmation bias, a little tendency to miss things in the data is not unexpected.  This seems to go past that to outright agenda-driven bias.  Not "mistakes" as he said in his apology, but fraud.

So how's that peer review process working out for you?   If the Climategate emails taught us anything, they should have taught us that old, senior scientists manage the process, squashing anything that challenges their approach, whether it's denying papers or getting editors fired.  It's a case study in corruption in science.  We shouldn't be surprised, because scientists are human and humans have proven corruptible. The peer review process, which is supposed to save us from this, is clearly broken.  It's time we either try to come up with a replacement or just acknowledge that peer review means essentially nothing.

It may seem like a stretch to link obvious fraud, like the vegetarian psychologists, and probable fraud, like vom Saal/BPA, to the establishment science that stifles peer review, silences critics and sucks up billions of dollars in funding, but it seems a difference of degree, not kind.  Doesn't it seem the anti-meat social psychologist would do the exact same things to a carnivorous psychologist's paper that the Climate Research gurus do those they don't agree with?


My argument is that like religion, science as an institution is and always has been plagued by the temptations of confirmation bias. With alarming ease it morphs into pseudoscience even – perhaps especially – in the hands of elite experts and especially when predicting the future and when there’s lavish funding at stake. It needs heretics. 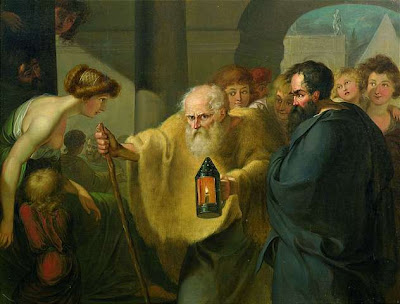 (Diogenes, looking for an honest man)
Posted by SiGraybeard at 10:17 PM