What's Need Got To Do With It?


So last weekend the fun show was in town again, the last until New Years, and we went up to see what there was to see.  I found something I've been kind of looking for, for a while.  A nice looking stainless .22LR revolver. 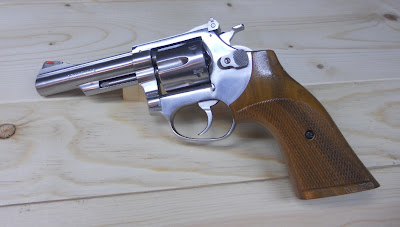 This is a Rossi M-511, apparently called the Sportsman.  It's a six-shot, DA or SA with nice adjustable sights.  The grips are not original equipment, but are nice target shooting grips.  Clean, relatively free of scratches, scuffs or other marks.  As Tam said the other day,

22LR pistols like the Walther P22, and the Sig Mosquito are very popular, and during the extreme ammo shortage of '09, I got a S&W 22A pistol - the reason for the "what's need got to do with it?" song parody.  It's just a ton of fun to shoot - well balanced, aims very naturally for me, just a lot of fun.  I set my targets back about as far as the range allows, and I could empty a box of 500.  While the little Smith will shoot pretty much all brands of modern, supersonic 22LR ammo, I have come across some that won't cycle properly (some old Remington Thunderbolt lead RN an old timer sold me).  I suspect that the revolver will be quite a bit less fussy with it, and even allow subsonic ammo.  Hopefully we'll see on Sunday.
Posted by SiGraybeard at 2:28 PM