There was a gun and fishing show down in the next county south of us, so since the combination of shooting and fishing covers most of our recreational plans, Mrs. Graybeard and I took the 45 minute drive down to check things out.  These shows seem to get bigger every time I go down there, and today didn't disappoint.  No guns, but I did buy a graphite fishing rod.  Mrs. Graybeard bought a Cold Steel knife like my EDC.

I know I've talked about this before, but I find it ... interesting... how folks crowd around the handguns but only one or two are looking at the shotguns.  I maintain that for an all around gun, but not one you'd want to conceal, it's hard to beat the value of a 12 gauge shotgun.  Whether it's for putting some food on the table or social work, it will be the go-to tool.  I still see Mossbergs available brand new, with two barrels (self defense and hunting lengths) for $300-ish.  A while back, Guffaw in AZ quoted the old saying, "stopping power begins at 12 gauge" and I think these images say it all.

First, while advocates may argue calibers, I think everyone would concede that 45ACP, 230 grain, JHPs are effective.  I mercilessly ripped this image from Brassfetcher.

Four large, nasty looking rounds, expanded from .45" to around .70", penetrating 12" into a ballistic gelatin block.  I don't know of anyone that would like to take the place of that block.

Now compare it to a single 12 gauge "tactical" (hollowpoint) slug.

Notice that the slug is still visible toward the left - 14" of penetration.  It expanded to 1" diameter.  Now look at the damage that the entry end of the block sustained.  More subtle is that the original entry point was on the left, like the 45ACP test, and the 6x6x16" block of gelatin flipped 1.5 feet into the air and off of the test stand

Penetration?  Let's put a layer or two of heavy denim between the shotgun and the gel. 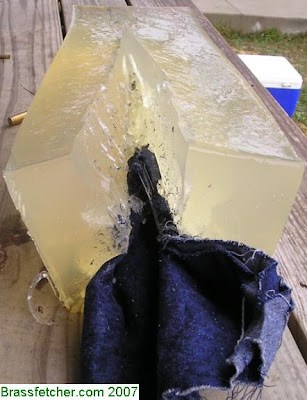 That didn't make much difference.  As they used to say on those dopey anti-drug commercials, "any questions?"  - Oh, and if you're a smaller person, or sensitive to heavy recoil for some reason, the only difference stepping "down" to a 20 gauge will make is for the coroner trying to find the pellets.
Edit 11-6 0940 EST to make the bottom picture display better on a mobile device
Posted by SiGraybeard at 8:28 PM