'Scuse Me, I Have a Dead Horse to Beat

A few odds and ends from the economatrix.

Peter over at Bayou Renaissance Man has an excellent coverage of today's announcement that the Fed will be "easing exchanges" with the ECB and other world central banks, allegedly until February 1. This ensures that you and I get to help pay for the bailout of the euro, which is bound to be just as productive as spending the money on hookers and cocaine, but without any stimulation for anyone putting out.  This deal is one of the big reasons behind the 500 point jump in the DJIA today, and probably part of the increase in everything, as inflation gets priced in.  He then follows up in the position of Economic Winner today with another great piece, The Fundamental Dishonesty of our Financial System.

The piece includes information on how one of the most despicable humans on the planet, former Treasury Secretary Hank Paulson (hawk, spit), gave hedge fund managers advanced notice that the Fed.gov was going to "rescue" Fannie Mae.  For non-ruling class folks, that's called "insider trading" and punishable by hard time in the gray bar inn.


Over sandwiches and pasta salad, he delivered that information to a group of men capable of profiting from any disclosure.


“You just never ever do that as a government regulator -- transmit nonpublic market information to market participants,” says Black, who’s a former general counsel at the Federal Home Loan Bank of San Francisco. “There were no legitimate reasons for those disclosures.”

Despicable humans?   I imagine you've heard by now that Gerald Celente of Trends Research was personally robbed by MF Global, John Corzine's little empire.  Celente (whom I respect greatly) is, unfortunately, just one of many folks that the MF'ers at MF Global F'ed over. H/T to the Blaze, for this video of Joe Biden bragging about going to Corzine for his expertise.  You can't overlook Corzine when you're looking for the worst of humanity.

And what do John Corzine and Hank Paulson have in common?  They both ran Goldman Sachs.  See The Fundamental Dishonesty of our Financial System. 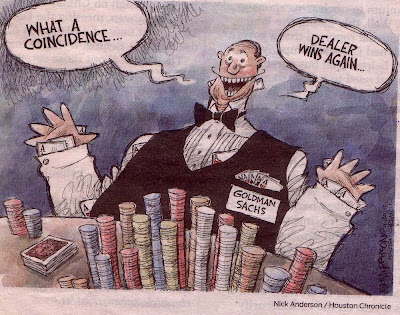