The Zombie Shoe is on the Other Foot - Whut?

Halloween was a strange day at work: I was in the building less than 2 minutes and saw my first zombie, a skeletal-thin older woman (which is to say, about my age) in white makeup with sunken black eyes and stage blood.  As the day progressed, I came across about a dozen other co-workers, all of whom chose to dress as zombies.  Ordinarily, there's a handful of different ideas.  On the way home, I glanced into my rear view mirror while sitting at a light, and saw another zombie.

And this all just a few days after several of us were saying the zombie fad has jumped the shark.

To top it off, I came home Monday night to hear Glenn Beck talking about this story:

In September, there was the “Tea Party Zombies Must Die” video game that allowed players to gun down Glenn Beck, Sarah Palin and Michele Bachmann, among others...

This new video, produced by RepublicanZombieDefense.com, is apparently intended to be comedic, although it is quite graphic.

You can watch it at that link.  From their press release:


“We are gay activists giving zombies makeovers with chainsaws and grenades,” said Luke Montgomery, founder of RepublicanZombieDefense.com. “The metaphor of Republicans as zombies is unfortunately very appropriate because their heartless opposition to gay marriage, healthcare, and climate change science is a political infection that if not fought back, will be deadly to the lives of millions of Americans. It is unbelievable that we live in an age when millions of Americans continue to be denied the right to marry, based on their sexual orientation. Progress is being made to eliminate this archaic way of thinking, but allowing Republicans to take the White House in 2012 will deal a huge setback to marriage equality.”

It's an interesting comparison that this group has no misgivings about portraying white republicans as zombies that need to be killed, while over the weekend in Virginia, a "Halloween themed graphic featuring a zombie President Barack Obama with a bullet hole in his forehead... was roundly rebuked by high-ranking conservatives including Virginia's governor."  Conservatives immediately condemned the zombie image of Obama. 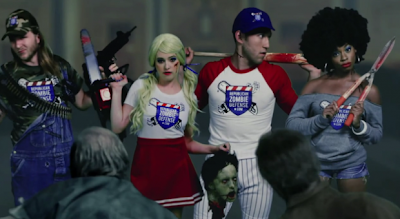 Just between us, I doubt the part about them being gay activists.  Aren't gays supposed to be artistic and creative?  Whoever dredged up this idea and made this video is neither of those.  And remember: it might well be better to be despised by the despicable than admired by the admirable.
Posted by SiGraybeard at 9:29 PM