When Folks Talk About the FSA...

Just because it's an army of non-productive folks dedicated to feeding off the productive (see "remora") doesn't mean the FSA won't expend any effort or money to feed.  Especially if it's Other People's Money.

Several people have linked to Mike-istan's three part series on the coming nastiness, "Concord Bridge or Fort Sumter".  If you haven't, it's worth reading.  (part i)  The paragraph that leapt off the page and slapped me between the eyes was this:


Here in Ohio we just had an election where the biggest issue was a referendum on repealing a pension reform package which would have just slightly slowed the gravy train for public employees. The public sector unions and their allies spent thirty million dollars to convince voters that asking state employees to contribute a few percent of their pay to fund their otherwise completely tax financed salary, benefit, and retirement packages, would leave the police helpless to stop crime, the fire departments without water, and death and destruction just around the corner. The rubes bought it and repealed the reforms by a two to one margin. (emphasis added - GB)

This has been the large, divisive issue that stands in the way of governments getting their finances straightened out: public sector unions that negotiate with politicians who have no stake in the negotiation.  The politicians give big sweet deals to public sector unions - it's not their money that they're negotiating away, after all - and those unions turn around and contribute money to those politicians to keep the fleecing going.  In my opinion, it will continue to get worse as we slide into worse and worse economic conditions.  At this point, it seems to me that the most likely flash point into actual violence is here.  We know that unions routinely commit violence against those they perceive as enemies; at some point, do they start punching out little old ladies at Tea Party rallies? After all, they got away with beating down Ken Gladney and routinely attack each other, why not taxpayers? 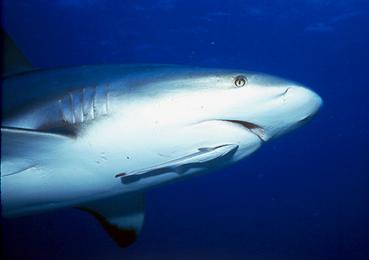 (A remora attaches itself to a shark or other large source of food with a tennis shoe-shaped suction area on the top of its head.  This way it gets a free ride, does minimal work, and consumes a steady supply of crumbs when the shark eats.  A perfect analogy for the AFSCME or SEIU public sector unions.)

How much improvement could have been made in the unions' retirement funds or health plans, if they had spent that 30 million dollars on their members instead of attacking the people who write their paychecks?