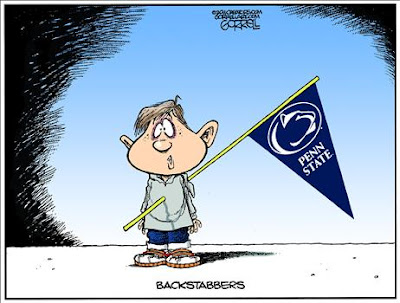 (source)
I've been hesitant to say anything about this because I just don't feel comfortable with the story; it seems like there's something else going on.  The behavior of all of the people involved seems so bizarre, I'm waiting for some other shoe to drop.

Nevertheless, there were riots the other night on the news JoePa was fired.  Students - you ought to read a little about what's going on before you protest this.  The way I see it, Joe Paterno ought to be in jail; or at least on house arrest.  Same goes for the school president, Graham Spanier, who didn't report the rapes to police and the coaching assistant, McCreary, who stumbled across the rapist, Sandusky, in the midst of raping a child and did nothing.

I've thought about this a lot over the last several days, and I keep coming back to the conclusion that there's only a couple of appropriate responses to finding a rapist in the act, and they all involve firearms on brain stems - granted you may need to use a shovel or fire extinguisher if you're in a gun-free/victim-terrorization zone.  If it was your son, your daughter, or wife, or mother; if it was you, what would you want the person who finds it to do?

OK, so McCreary proved himself to be a coward and just reported it to his boss, Paterno, the next day.  Paterno, in turn, proved himself a coward and reported it to his boss.  At some point, these cowards have another trigger point: if they don't see Sandusky taken away in cuffs within a few days to a week at most, they need to report it to the police themselves.  Having not done that, they're accessories to child rape and need to be behind bars.

The inimitable Mike V. over at Sipsey Street did a great piece yesterday talking about when "The Institution" - the collective - becomes more important than mere individuals, this sort of thing happens.  You've probably read it; if not go read.  I can only say that the only possibility more revolting to explain what went on at Penn State is that the institution which Paterno, Spanier and the others are protecting is not Penn State, but a child sex slavery ring.

I never attended a college with a football team, but anyone who knows any thing at all about college sports knows about Joe Paterno.  Truth be told, I've always respected him.  No longer.  At this point, he's among the most despicable people I know of.

Shotguns on brain stems.  The only appropriate response.

Posted by SiGraybeard at 2:27 PM