Normalcy bias is a pretty good way to get killed, generally speaking. The term refers to a very strong tendency for people to think that life will keep going more or less the same way as normal.  It's why people in the World Trade Center, after the first plane struck, took the time to gather belongings and turn off their computers before leaving.  The Survivors' Club, by Ben Sherwood, talks in great length about normalcy bias and how that one of the biggest things that separates those who survive disaster from the rest is that survivors considered that it could happen; they looked for the emergency exit on that plane, looked for the life preservers on their ferry, or considered what to do if an armed person tried to rob them at gunpoint.  Hat tip to Western Rifle Shooters Association for a link to John Robb's Global Guerillas column on the Parable of the Happy Turkey for getting me thinking of Normalcy Bias.
The leap in Robb's article is to the 2008 financial collapse and how the "idiot savants at Goldman Sachs" put wunderkinds in charge of billions of dollars; 20-somethings (who were very smart, don't get me wrong) who could not anticipate the real risks because they didn't have enough experience in life to doubt their computer models.  It's a perfect example of why you shouldn't put kids like that in charge of important things without a graybeard to say "what if?".

The normalcy bias, though, is pretty darned comfortable.  I spent the weekend enjoying the sensation that this Thanksgiving weekend was a normal one, and probably not the last Thanksgiving of plenty I'll get to share with my family.  I dare say it's why most of America is watching TV or fighting over $2 waffle makers. 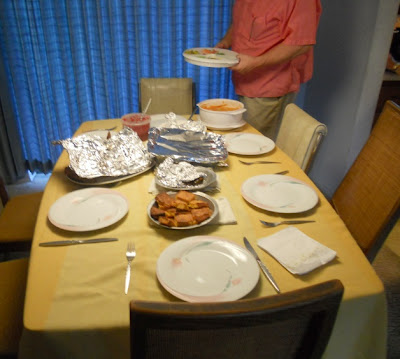 But if you've been here before, you know that while I may occasionally look away or pretend things are normal, it's not a steady diet.  Even troops on guard duty "take five" now and then.  I will continue to look the coming disaster in its face and tell you what I see coming.
Posted by SiGraybeard at 4:24 PM