I'm In That Awkward Phase

Mrs. Graybeard and I have a regular joke between us that centers on being caught in between - the most recent version has been "we're at the awkward age between kids and grandkids";  it has also been "I'm at that awkward phase where I understand the beginning books, but not the advanced ones".  Same format works for a variety of jokes.  Especially if they don't have to be all that funny.

In this case it goes I'm not rich enough to be in the 1% that Occupy What Ever is protesting, but I sure as hell don't want to associate myself with the pigs protesting as the 99%.  To begin with, I strongly believe individual rights and freedoms; they are collectivists.  PJ Media has put together an official list of the supporters of Occupy Everything - they have sources for all of these claims.  They include:

to name just about half of their list.  You've also seen, I'm sure, that Obama, Biden, Pelosi, and a legion of evil party bigwigs support them, too.   Remember what Mamma said about being known by the company you keep?

I have nothing in common with any of those groups, and my default is that unless I really study the heck out of things, anything they're for I'm likely to be opposed to.  Any friend of the Revolutionary Guards of Iran, or the American Nazi Party, is not at all likely to be a friend of mine.

Case in point: the media has not widely reported the ongoing problems with rapes and other assaults going on in the camps.  It is widespread, with reports from Cleveland, Baltimore, New York, and others - (even Scotland!).  But it's worse than that.  The organizers are trying to keep the rape victims from going to the police, saying the Occupy Whatever folks will take care of it - by arranging counseling for the rapist!  I assume they give them the dreaded down twinkles of disapproval.  Personally, I think such people need to be introduced to Messrs. Smith and Weston, or John Moses Browning - if it was my wife, daughter or other loved one.  But in their effort to protect the socialist cause, women have been threatened with additional violence or death for reporting their assault! Judging by things women have said on tape, they're at least as afraid of their organizers as they are the rapists.


She said that weeks earlier another woman was raped.  “We don’t tell anyone,” she said. “We handle it internally. I said too much already.”

BigGovernment.com has an updated rap sheet; just search it for rape or assault. 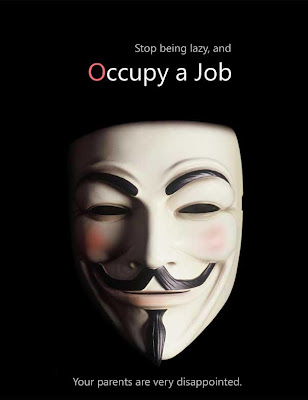 If you happen to feel that your life, or the life of your wife/daughter/girlfriend/friend, is worth more than their glorious protest, you might find yourself getting the classic communist treatment - which is to say "killed".  Virtually a third of those polled in New York say they'd approve of violence to achieve their ends.

No, in every way I can think of, I'm much more like these folks. If you haven't seen that place, read for a while.  Good stories from good people.