If OWS Is Really Against Big Bankers...

If Occupy Wall Street is really anti-big business - and especially banks - why do they keep destroying small businesses?

In San Diego, they "thanked" some hot dog vendors by vandalizing their hot dog carts, throwing urine and blood on them.  They did the same for coffee carts.


In an ironic twist of fate, the owners of pair of San Diego coffee and hot dog carts — who initially provided free food and beverage to Occupy protesters – had to shut down after demonstrators turned violent, splattering their kiosks with blood and urine.

In New York, Marc Epstein, owner of the Milk Street Cafe, had to lay off 21 out of 97 of his workers in this newly (June) opened restaurant.  It's not like he's a new owner who doesn't know how to run a place: he has been running his Boston locations for 30 years and reports this is his first layoff.  His main problem: not the protesters themselves but the inevitable rearrangement of the city's traffic patterns to avoid them.  A prime example of unintended consequences. 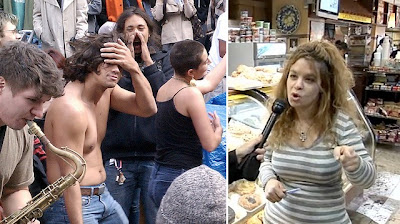 I feel sorry for Stacey Tzortzatos, (rt) owner of a little restaurant called Panini & Co. Breads, "across from" Zucotti park.  Protesters would come into her place to use the bathroom.  They allowed this go on for a while, but one of the useful idiots was apparently sitting on the sink and trying to bathe.  The sink departed the wall, broke, ripped out the plumbing and flooded the place.  Cost a few thousand dollars to fix.  Understandably, they now don't want to allow anyone other than paying customers in to the place to use the facilities and she gets death threats.


“I’ve been told, ‘Watch your back!’ 10 times,” Stacey Tzortzatos, owner of Panini & Co. Breads, located across from Zuccotti Park, told The Post yesterday.

She and her employees are terrified by the constant threats, which she said began after she demanded the protesters stop using her shop’s restroom as a place to bathe every day.

The final straw came about two weeks ago, when the demonstrators broke a bathroom sink, flooding the shop, and clogged the toilet -- setting her back $3,000 in damages.
...
“I have the police in here 10 times a day, [and] I’m the bouncer. I’ve been called the spawn of the devil. “It’s unbelievable what goes on in here every day, ” Tzortzatos said.

The other "City by the Bay", and seeming center of the worst violence, Oakland, has been seen small businesses hurt badly by the protests, with several businesses citing damages and extreme drops in sales.

If they really are protesting bailouts to banks and crony capitalism, and not just trying to destroy capitalism itself, the #OWS idiots are singularly ineffective.  Have you heard of a single bank that has been impacted?  I haven't - only these struggling small businesses.  The profit margins in restaurants, taverns, and the other small businesses being hit here are not large and these businesses are not "rich fat cats".  The owners and managers are probably lucky to keep the lights on.

Sure, these people have the right to protest. Absolutely, positively - without any question.  But young Ms. Tzortzatos, Mr. Epstein and all the others have a right to their livelihoods - to run their businesses as they see fit.  The occupier pigs** don't have the right to run them out of business.  It's wearing on too long and NYC has let it get too far out of hand.  Neighbors - just plain folks - are complaining about the constant drumming, the stench and the destruction of their favorite places.  Time for the OWS crowd to go home.


But the protesters appear to be digging in, erecting three of what will eventually be more than two dozen, 16-by-16-foot military-style tents that will help them stave off hypothermia in the coming winter.

And they’ll have some entertainment today.

Music legends David Crosby and Graham Nash are slated to perform an acoustic set of protest songs this afternoon at Zuccotti Park.


Occupy Wall Street has tried to reduce the strain on local businesses by setting up three 24-hour porta potties several blocks from the park on Friday. But DNAinfo reports that as of yesterday, many occupiers didn't know they existed, and others chose not to use them. "I use a street corner, a telephone pole," 22-year-old protester Terrence Hubbard says. "I did it a couple of times in my tent when I was lazy. Otherwise, I go to McDonald's."[emphasis added - GB]

You relieved yourself in your tent?  What kind of animal are you?  My cats have infinitely more class than that.