On The Anniversary of Kristallnacht

Well, not exactly the anniversary - the night after.  If you're not familiar with the word, kristallnacht - literally "crystal night" but usually translated as "the night of broken glass" - was November 9, 1938.  This was the night that Hitler's SS troops went through the country on a night of terrorism, a hint at the coming world war.

Kristallnacht is important because:


It took the persecution of Jews from economic, political, and social to the physical with beatings, incarceration, and murder. It is often referred to as the beginning of the Holocaust.

This year, on Thursday, November 10, cars were torched, swastikas and anti-Jewish epithets were painted on cars, sidewalks and buildings.  In Berlin?  Damascus?  No, in Brooklyn, New York City.  Residents, including a few survivors of the holocaust, were understandably alarmed.  While it certainly meets every definition of hate crime, it appears to be alcohol fueled: police reported many empty corona bottles in that area.  Not that beer bottles could not have been dropped by anyone traversing the area.  It is certainly tempting and easy to make this association:


Sandra Simone, a speech therapist at a nearby school, tied the attack to the ongoing Occupy Wall Street protests, where signs blaming Jews for the economic meltdown have been spotted from time to time.

But to me, it's simply a signpost on the road we're traveling as a country and a world.  Not an exit; I'm not sure any exits are left on this road.  Isolated event?  Not at all.  Antisemitism is rising.  The old hatreds are returning. 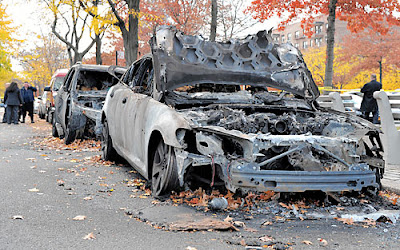 Posted by SiGraybeard at 7:55 PM