While everyone is talking about a European collapse I consistently find I'm the only one warning people that the Chinese are in trouble, too.  Pretty much everyone talks about the Chinese coming here to collect on the bonds they're bought, by taking everything from our land to "our wimmin".  I'm not going to sit here and say that's impossible.  I ain't that foolish.

But the Shanghai market is on the verge of a big decision point.  Within the next couple of weeks at most. 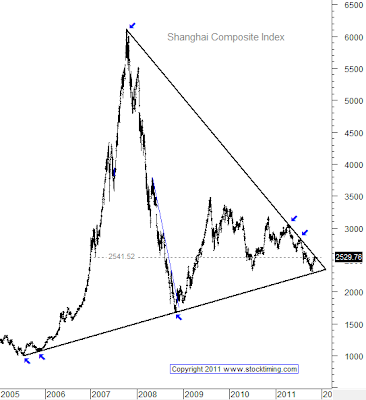 When these triangle (also called flag or pennant) patterns appear, the tracked data has to break out of it; there is simply no way it can't.  Which way is it going to break?  That's the bazillion dollar question.  No one can answer that based on this chart.  In the larger sense of what drives investment in the Shanghai market, capital from US and EU sources certainly flows into that picture.  As EU wealth gets sucked up into the ponzi scheme to keep the EU alive, will there be any to look for opportunity in China?  Same question about dollars?

When the EU collapses and the dollar follows, which way do you think it's going to go?

The simplest way to put it is, if no one has money to buy the cheap crap they produce, how will China have any growth?
Posted by SiGraybeard at 9:13 PM