Wherein tonight's installment can be called, "You can tune a piano but you can't tuna fish." 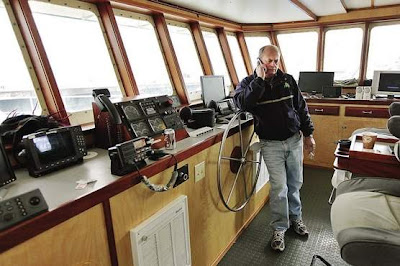 Carlos Rafael, by everything I can find, is an ethical small businessman who owns a small fleet of fishing boats, and attempts to navigate the waters of excessive federal regulations.  Those waters are ending up far more treacherous than the waters offshore Cape Cod, where his business is based.  I say he's an ethical fisherman because he purchased permits for 15 of his boats to allow them to take a giant bluefin tuna.  Bluefins are ordinarily caught on hook and line after great amounts of effort - but his boats are bottom fishing boats that deploy nets.  To catch a bluefin that way is a "once in a blue moon" event, as Rafael says.  The story begins on November 12th:


Boat owner Rafael, a big player in the local fishing industry, was elated when the crew of his 76-foot steel dragger Apollo told him they had unwittingly captured a giant bluefin tuna in their trawl gear while fishing offshore.

Bluefins, you see, are highly valued in Japan as sushi; their flesh looks more like beef steak than just about any other fish and commands a very high price.  "A 754­pound specimen fetched a record price at a Tokyo auction in January this year, selling for nearly $396,000."  The fish on Rafael's boat was estimated at more than a hundred pounds bigger than that fish.  If I were him, my thoughts would be running along the lines of "Ca Ching!" over and over.

As the Cape Cod News reports:


However, when Rafael rolled down the dock in Provincetown there was an unexpected and unwelcome development. The authorities were waiting. Agents from the National Oceanic and Atmospheric Administration's Office of Law Enforcement informed him they were confis­cating his fish — all 881 pounds of it.

Even though the catch had been declared and the boat had a tuna permit, the rules do not allow fishermen to catch bluefin tuna in a net.

“They said it had to be caught with rod and reel,” a frustrated Rafael said.“We didn't try to hide anything. We did everything by the book. Nobody ever told me we couldn't catch it with a net.”

In any case, after being towed for more than two hours in the net, the fish was already dead when the Apollo hauled back its gear, he said.

“What are we supposed to do?” he asked. “They said they were going to give me a warn­ing,” Rafael said. “I think I'm going to surrender all my tuna permits now. What good are they if I can't catch them?”

The Feds, as always, told him he was expected to know that he could only use rod and reel.  It's his responsibility to know every little piece of every regulation in the Federal bible.  "Ignorance of the law is no excuse". What?  There's no mens rea?  That is so last century.


No charges have yet been filed in connection with the catch, but a written warning is anticipated, according to Chris­tine Patrick, a public affairs specialist with NOAA who said the fish has been forfeited and will be sold on consignment overseas. Proceeds from the sale of the fish will be held in an account pending final reso­lution of the case, NOAA said. No information on the value of the fish was available Friday.

“The matter is still under investigation,”said Monica Allen, deputy director with NOAA Fisheries public affairs. “If it's determined that there has been a violation, the money will go into the asset forfeiture fund.”

I just love the passive voice.  No person, no individual ever "determines if there has been a violation".  Don't want any petty bureaucrat to attract attention for this, do we?

This is a serious issue, not just for Mr. Rafael, but for anyone who goes fishing.  There are federal rules and state rules that don't usually say the same things.  You are expected to know them all and be in compliance with them all or not go fishing.  If you inadvertently catch the wrong type of fish or catch it in the wrong way, perhaps it's better to just dump the carcass at sea. Protein is never wasted in the sea.
Posted by SiGraybeard at 8:30 PM