In last week’s post on RF safety,  I mentioned a worksheet that the ARRL provides to help you determine your RF exposure.  http://www.arrl.org/files/file/Technology/tis/info/pdf/rfex1_2.pdf. I thought it would be useful to show the evaluation of my station on one band.

The worksheet dedicates one page (A) to determining the power at your antenna by looking up the cable you’re using and determining its loss.  As I’ve said before, with a 100 W antenna and some unavoidable losses between the radio and the antenna, the 24.9 MHz (or 12 meter) band is the first place many of us will need to determine exposures.  My antenna is a Log Periodic Dipole Array (often sarcastically referred to as, “an antenna that operates poorly over a wide range of frequencies”) with minimal – but some – antenna gain on 12m.  My cable is RG-213/U, a more recent version of the RG-8/U cables that hams have been using for decades.  Here’s what worksheet A looks like for my station: 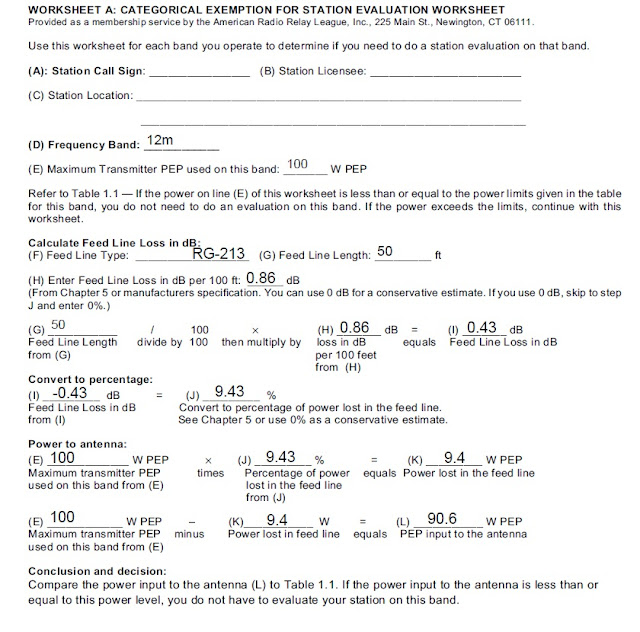 There’s a couple of calculations in there that might be things you don’t think of.

First, how do I know the loss?  Because RG-213/U is a well established standard cable, I find a datasheet from a reputable manufacturer and find the table of losses vs. frequency they provide. 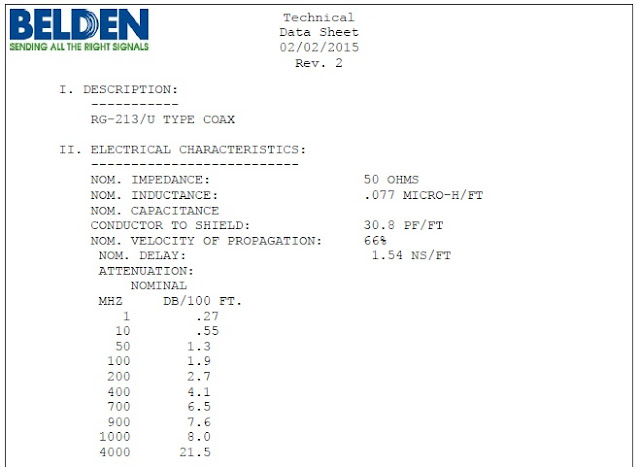 You can see that they list attenuation at 10 MHz and 50 MHz, not at the 25 MHz I need.  Time for some linear interpolation.

Given those numbers I’ll round up to 0.6 dB loss at 10 MHz and use 1.3 dB at 50, I’ll solve for the slope assuming it’s a straight line between those points, which is going to be close.

Worksheet B takes this process almost to its conclusion.  It multiplies the powers found at the end of A and then leaves you to find a few more details. 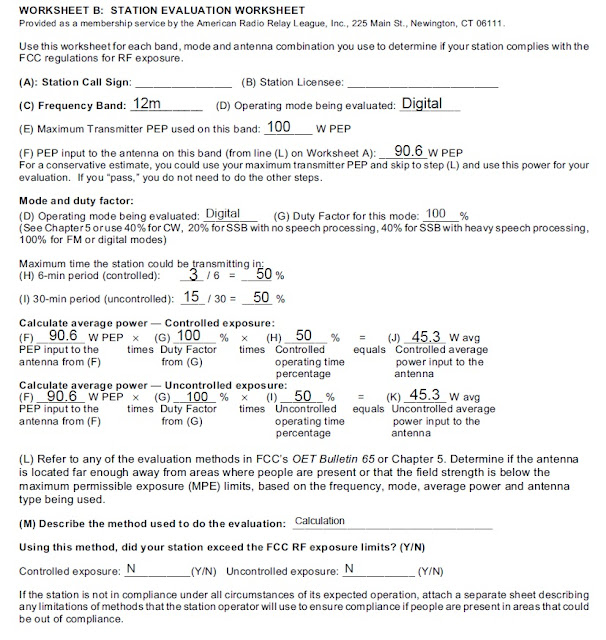 The Duty Factor is based on recommendations from the ARRL RF Safety page.  It considers digital modes as the worst case, and my mental model for this page is operating the FT8 mode, which has taken the ham radio world by storm.

This sheet shows my 100% duty factor and 50% transmit time (built into FT8) means I deliver 45.3 W average to the antenna.  By the first table (in the last article) we can see that evaluation is required on 12m if I deliver 75W to the antenna, and I’m delivering 45.3W.  The harder question is in the second table in that post, which has required distances for people to be from the antenna, depending on antenna gain.

The manufacturer’s website for my antenna has one number for gain, 7.24 dBi.  That’s between the 6 and 9 dB gain entries and the numbers shown are for the number of meters from the antenna people should be excluded.  The right column is for uncontrolled (general population) exposure, the one we should be using for this.  The worst case would be going to the next higher gain and saying people should be 7.5 meters from the antenna or 24.6 feet.  The antenna is at 20 feet above ground, so a 6’ tall person would have to be 20.2 feet from the front of the antenna.  Since that’s inside the fence on my property, I believe that keeps uncontrolled exposure below the limits.

Antenna gain is a concern of mine because it doesn't mean what people tend to think it means when dealing with powers.  I've seen this misconception with professionals, so I'm sensitive to it.  Antenna gain doesn't mean that if I put 100 Watts into an antenna with a gain of 6 dB (4 times) that I'm getting 400 watts out.  That's impossible.  If I put 100 Watts in, I get 100 watts out.  What antenna gain means is that one antenna puts more power in some direction than another reference antenna, and it does that by taking power from all the other directions and putting it where the antenna is pointed.  That last table looks suspiciously like they're saying there's more power out of the antenna, but there isn't.  It's stronger in one direction, compared to another antenna but that's all.  I'll cut them some slack because this is work in the extreme near field of the antennas and that's absurdly complex to model.

Posted by SiGraybeard at 7:36 PM