Virgin Galactic's Saturday test flight of their suborbital passenger ship called VSS Unity apparently fulfilled all the mission's goals, according to the company website's news page.  Here's a highlight video that is shorter than the complete flight coverage, but includes some cool photography:


This is the third flight of the vehicle and the first from Spaceport America in New Mexico.  As mentioned Friday, this was a test to verify that they had resolved a self-interference problem that kept the last mission from succeeding.  According their website, VSS Unity achieved a speed of Mach 3 after being released from the mothership, VMS Eve, and reached space, at an altitude of 55.45 miles (89.24 km) before gliding smoothly to a runway landing at Spaceport America.

The purpose of this vehicle is space tourism, with suborbital flights that meet the definition of being in space.  It helps that different organizations have different definitions for the Kármán line, the official boundary of space.

To borrow part of their PR Blurb from their website.

Michael Colglazier, Chief Executive Officer of Virgin Galactic, said: “Today’s flight showcased the inherent elegance and safety of our spaceflight system, while marking a major step forward for both Virgin Galactic and human spaceflight in New Mexico. Space travel is a bold and adventurous endeavor, and I am incredibly proud of our talented team for making the dream of private space travel a reality. We will immediately begin processing the data gained from this successful test flight, and we look forward to sharing news on our next planned milestone.”

Virgin Galactic fulfilled a number of test objectives during the flight, including:

Following the flight, and in line with normal procedures, Virgin Galactic will conduct a review of all test data gathered and thoroughly inspect the spaceship and mothership.  Once the team confirms the results, the Company plans to proceed to the next flight test milestone. 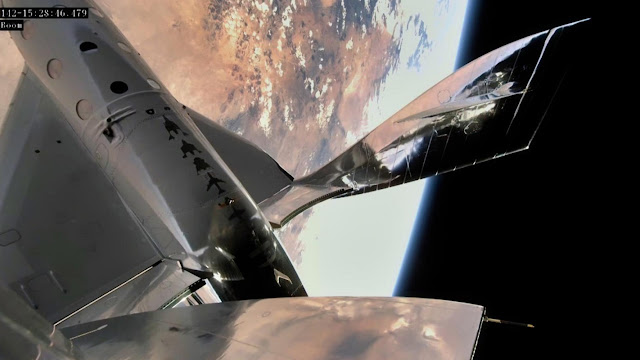 Clearly a Virgin Galactic photo, but I reduced the size slightly to meet the Blogger requirements.