This is the finished Version 3 of the Epiphone jack plate I talked about yesterday. 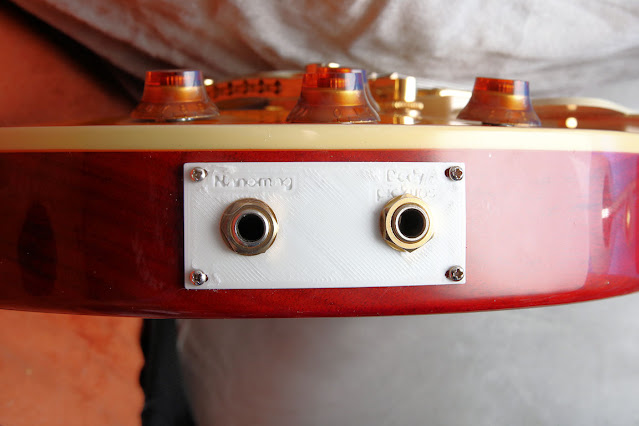 I tried the version I mentioned at the end of last night's post and while the jacks fit better, it was still too high in the middle.  After playing with it a while, I thought that must mean the corner mounting holes were too far apart and putting the screws in place was pushing the plastic toward the center, making the plate buckle.  I made some measurements of the hole spacing but wasn't confident that measuring on the (roughly) 6" radius of curvature gave me anything I could count on.  I decided to make the screw holes into slots.  It now mounts flat onto the body.  All of the screws are closer to the ends of the slots where the original holes were than the newer end.

I'm not happy with the lettering, and that's after switching to a different font that seemed like it was bolder and wider.  I might make another one with no lettering and engrave it on the mill, but I'm not sure.  I could extend that to not being wild about the finish, either.  There are videos about acetone smoothing of PLA; I should look into that, too.

Posted by SiGraybeard at 5:24 PM