NASA Asks for Biggest Budget Ever in FY'22

According to a news report at Ars Technica, in the largest Federal Budget proposal ever, NASA has requested a 7% increase over their last year's budget, which appears to be the largest NASA budget I can find.  I did no corrections for inflation.

The president's budget request seeks $24.8 billion for the coming fiscal year, a nearly 7 percent increase over the $23.3 billion in funding NASA received for the current fiscal year, which ends on September 30. Congress will ultimately decide funding levels, of course, but this budget request is indicative of White House priorities.

The White House is seeking $7.9 billion for NASA's science programs, including missions to explore the Moon and other planets. This represents a nearly 9 percent increase over last year's budget for science programs.  Earth science and planetary science receiving the most significant increases.  NASA administrator Bill Nelson said, "it’s the largest budget request for NASA science ever."

We can be sure, considering other Biden preferences, exploration intended to provide targets for climate science will be top of the pile, but they also include lunar and other planetary explorations goals, too.  This includes a 2026 (launch date) mission to retrieve samples from Mars, part of the mission that this year's Perseverance rover was intended to perform. 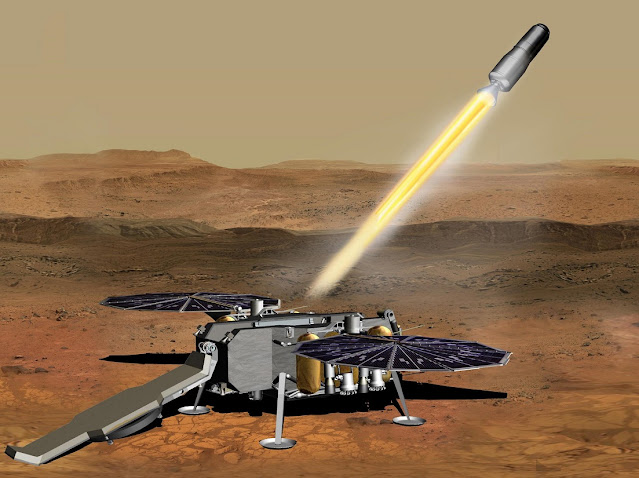 The White House has also requested $1.195 billion for the development of a Human Landing System as part of the Artemis Program to return astronauts to the Moon by 2024. Nelson said this level of funding would be enough to support a demonstration mission—using SpaceX's Starship vehicle—as early as 2024. The funding would also allow NASA to begin to implement a competition for future lunar landing contracts that might be won by a Blue Origin-led team or Dynetics.

There's mention in here of the way Blue Origin is lobbying congress to get a contract to back up SpaceX on the HLS.  There's resistance to this in the congress, including from the usual sources who think "every billionaire is a policy failure" (Bernie Sanders) as well as from Senator Rand Paul, who isn't of that mindset.  There are better reasons to oppose Blue Origin than simply that Jeff Bezos is a multi-billionaire.

NASA has said it supports more robust competition, but to enable this idea for the complex lunar lander program, the agency needs more funding. That battle is currently being waged in the Senate with an amendment to the Endless Frontier Act. The bill would authorize an additional $10 billion over the next four years to ensure that a second lander is developed in parallel with SpaceX's Starship vehicle. However, this amendment has been criticized by some senators, including Bernie Sanders and Ron Paul, because the likely beneficiary is Blue Origin and its owner, Amazon founder Jeff Bezos.

The Endless Frontier Act didn't come up in the article the other day about Blue Origin's lobbying.

I suppose it makes sense that in Biden's $6 trillion proposed budget, the largest US federal budget in history that NASA would be getting more money, too.  It's not all social programs.

In reality, congress hasn't passed a "real" Federal Budget since 2009 (article from 2012 talking about it), which tells me they're not likely to pass this one, either.  Instead, we'll get some number of continuing resolutions to authorize some spending or other.  While it's encouraging that NASA is working toward a moon landing in 2024, I find it more encouraging that SpaceX is planning to send several unmanned Starships to Mars in the same year.  Even more encouraging, they're not doing it on tax money; they're doing it on their dime.  More specifically they're doing it on revenue from paying customers for launch services and for Starlink.