On Saturday, May 15th, Rocket Lab launched its 20th mission for paying customers of their Electron small satellite launcher.  The vehicle developed a failure with its second stage, seconds after it started firing.  I've queued up Rocket Lab's live video at about t-20 seconds and the second stage shutdown occured at about T+ 2:43.  The mission failure resulted in the loss of the customer's payload, two BlackSky Global satellites. 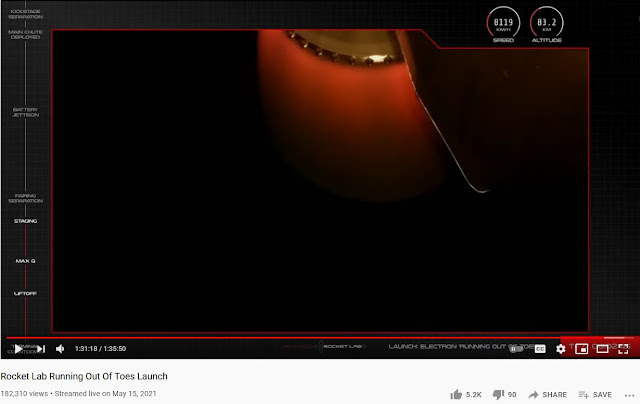 This screen capture is from their second stage camera watching the engine and the process of shutting down is still going on but mostly complete.


"Preliminary data reviews suggest an engine computer detected an issue shortly after stage two engine ignition, causing the computer to command a safe shutdown as it is designed to do," the company said. "The behavior had not been observed previously during Rocket Lab's extensive ground testing operations, which include multiple engine hot fires and full mission duration stage tests prior to flight."

Rocket Lab's mission control, based near the New Zealand launch site, continued to receive "good telemetry" after the second stage's Rutherford engine shut down. As a result, the company's engineers believe they have plenty of data to perform a comprehensive review into the anomaly. The US Federal Aviation Administration will assist in the investigation.

While Rocket Lab is now a well regarded launch provider in the smallsat sector, this mission failure comes less than a year and seven missions since their last failure on their 13th mission last July.  Rocket Lab is the company that routinely gives every mission a catchy name.  You can see from the screen capture above that this mission was named, “Running Out of Toes” (the tenth mission was what you'd expect, “running out of fingers”) and the 13th mission was called, “Pics or it Didn't Happen.”  Rocket Lab was able to characterize and fix last July's problem relatively quickly.  Its next mission launched just eight weeks later.  They're under the gun to do the same now.

Naturally, competitors will argue that their system is getting less reliable by saying it was 12 launches before their first major "loss of vehicle accident" and seven launches to the next one.  (That's some bad statistics right there).  The timing is bad because competitors such as Virgin Orbit and Astra are beginning to demonstrate small-satellite launch systems, and others such as Firefly, ABL Space, and Relativity Space may also launch their vehicles later this year for the first time. That means there will be more competition for small-satellite launch contracts, and customers will factor in reliability.

Add to that scenario the fact that Rocket Lab announced at the start of March that they were going to develop a larger vehicle, in the payload class of the Falcon 9, to go head to head with SpaceX.  In March, they also announced plans to become a publicly listed company on the Nasdaq via a merger agreement with Vector Acquisition Corporation.  At a time when they need to look like a solid company that aces everything it does, a failure is not a good thing to face.

Just goes to show you the wisdom of the saying: “orbit is hard.”

While they will surely tell you the purpose of the launch is put their customers' satellites in the right orbit, they did achieve a different milestone they were trying for on this launch; they recovered their booster stage for reuse.  Not propulsive landing, like Falcon 9, and not recovery by helicopter as they talked about in 2019.  They let it splashdown in the Pacific and lifted it onto a ship.  This is the second booster they've recovered this way.