If you're waiting to see if the new method of lighting the three Raptors on SN10 will work better than the "we were too dumb" version on SN9, this is very likely your week.  In fact, tomorrow might be your day.  The weather was too bad yesterday and the first part of today to attempt, but the Temporary Flight Restrictions that will allow flight to 10 km are valid tomorrow through Friday.  At about 2:30 this afternoon, Boca Chica Village resident and NASA Spaceflight's regular photographer on scene, BocaChicaGal Mary, retweeted:


Happy to let y’all know that I have been asked to evacuate for Starship SN10 launch attempt tomorrow. It looks like it will be a beautiful day for a launch. I can’t wait to see SN10 nail the landing! 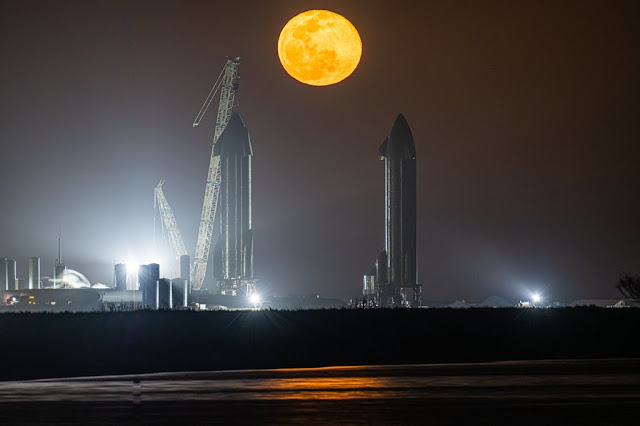 A screen capture from Nerdle Cam with SN10 on the left and SN9 right back in January.

It looks like everything is in place to say they'll attempt the test tomorrow.  The other two test flights were both fairly late in the day, so that's the only clue I have.

Here within viewing distance of the Kennedy Space Center/Cape Canaveral Space Force Center complex, we had a third straight scrub of the next launch of 60 Starlink satellites, the mission called Starlink V1 L17 or simply Starlink-17.  So far this week, they had an abort called by the Falcon 9's software with 1:24 minutes left in the countdown for a Sunday night launch, a Monday evening launch and now tonight.  On Sunday, Teslarati was calling this, “by far – SpaceX’s most delayed Starlink launch since the company began launching the spacecraft in May 2019.”


New Zealand/US company Rocket Lab announced a heavier lift, reusable booster called Neutron which they intend to fly by 2024.  The rocket will have a capacity to orbit of eight tons (I'm sure that will depend, as always, on exactly which orbit) intended for launching constellations of satellites like the Falcon 9 does.  It's intended to be rated for manned spaceflight, also like the Falcon 9.  The payloads a Falcon 9 can lift to orbit can exceed 10 metric tons, but can also be quite a bit lower, depending on the orbital height, launch facility and all those important details.

That announcement, however, is a routine corporate announcement.  What you really want to see is the Peter Beck (founder/CEO) video at their twitter account.