I'm sure they must be breathing easier in the offices of the SLS program this evening.  They conducted an apparently flawless static test firing for the full duration, over 8 minutes. 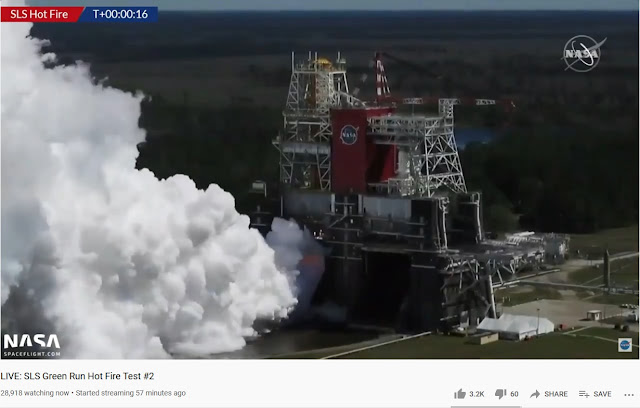 As you might gather from the lower left corner of that screen capture, I watched coverage on NASA Spaceflight . com, and we already have the update from Artemis program declaring this a successful static firing.  This was a complete simulation of the expected flight profile, with engines running at so-called "109%" at liftoff, throttling back during the time when Maximum Dynamic Pressure would occur (Max-Q), and throttling back to full power for the rest of the boost phase.  There were tests done to wiggle all four engine bells around and measure the dynamics that induces into the test vehicle.  They even tested the automatic engine shutoff in case the engines run too long and start to run rich on the fuel, which is liquid hydrogen.  The total test time was 499.6 seconds.

The white cloud in the picture is a mix of cooling water and the water produced while burning the hydrogen/oxygen the engines run on.  It rains on the surroundings.

As always, credit where it's due, so congratulations to the SLS team.  A successful test was absolutely required and they pulled it off.