Oh the Precious Goal in Life to Be A Victim

There was a story this week, toward the bottom of the news where it belongs, about a dude who considers himself a woman, but hasn't actually had the surgery that matters the most, yet.  You know, the surgery Rush used to call the Chopadickoffofme.  When poor dude goes through the TSA checks to get on an airplane, they always find this anomaly between his legs and need to resolve it.  Dude has gone screaming to any camera and microphone that he can find to scream to about (I suppose) how unfair it is that the scanners can't read his mind and learn how he identifies.  The story on the Blaze says that model and content creator Rosalynne Montoya recently shared an experience with social media users and insisted that TSA is transphobic.

"Can we talk about how horrible it is to travel while being transgender sometimes?" Montoya asked in the now-viral video, which has been seen by at least 18 million people at the time of this reporting. "I always have immense anxiety leading up to going through security. And this means that I totally recognize the privilege of having all of my documents correct. So, the gender marker on my license, for example, says 'female.'"

"But, going through the scanner, there's a male scanner and a female scanner in the TSA checkpoint," Montoya continued. "And, looking at me, you know, I look like a woman and I am a woman. So, that's great. I love having systemic privilege when I feel unsafe, which is in an airport. But, going through the scanner, I always have an 'anomaly' between my legs that sets off the alarm.

Pardon me if I get your pronouns wrong, but the TSA isn't transphobic; they're bomb-phobic.

The story is also covered at PJ Media, who got in contact with TSA and reprints much of the way they address the situation.

I have a simpler example.  Back two days before New Years Day of Y2K, Mrs. Graybeard and I were hit by a pickup truck while riding our bikes.  She had several stainless rods inserted in her back; we call it a pound but don't really know what it weighed.  As a result, she was given a card by her doctor to hand to the TSA.  It states she has implants that will show up on their scanners.  We've taken at least a dozen trips in the intervening years and Every Single Time she goes through the scanners, they stop her for more thorough investigation.  Every Single Time we've asked the TSA about the cards they say (in effect) "nice cards, but we have to be sure."  Essentially, anyone could print up cards like that.

And that's what's going on with Rosalynne Montoya.  Anybody could say they're a trans woman and have a pound of explosives between their legs.  Once the anomaly shows up, they have to prove it's safe.  They're responding to the risk, not the person. 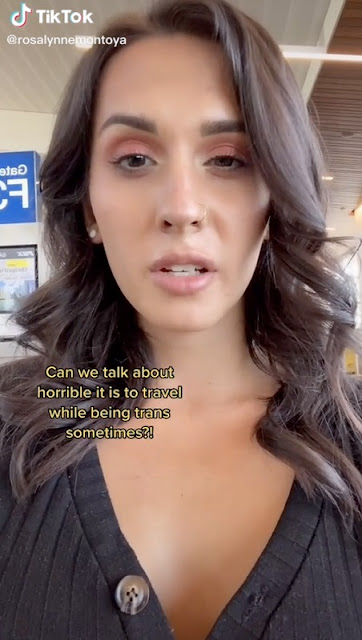