Another Strike Against Boeing and the SLS

According to a news item in the Ars Technica weekly "Rocket Report,"  George Abbey, NASA veteran as former director of Johnson Space Center and an influential, long-time human spaceflight leader, in a report for the Biden administration (pdf warning) has said that the Space Launch System (SLS) should be reconsidered.  The goal of the document, from the Baker Institute, was to provide decision-makers "relevant and effective ideas" for supporting the nation's policy goals.


Launch costs should matter ... "In view of the current availability of a significant number of commercial launch vehicles with proven payload capabilities, as well as the industry's progress in providing a launch vehicle with significantly greater lift capabilities, the Biden administration should reconsider the need for the SLS during its annual budget review," writes Abbey, who is now a senior fellow in space policy for Rice University.

I know that it may seem that I'm picking on the SLS, but it seems to be the embodiment of what I consider "old space."  The program was started for the political benefit of spreading money around rather than for a specific mission, and was changed over and over again as projected missions changed.  Now, approaching five years late, the dates on their schedule appear wildly optimistic.

The Green Run amounts to a full-duration (eight minute) static fire of the SLS core stage: the main liquid-fueled booster and its four repurposed Space Shuttle Main Engines (SSMEs).  Prior to that ignition and burn test, Boeing and NASA would put the rocket through a number of other basic tests for the first time, including power-on, modal analysis, and a wet dress rehearsal (a static fire without the ignition).  If you watch SpaceX at Boca Chica, this is what you see going on when a new Starship prototype goes to the test stand.  They take a month, but it's a much smaller vehicle.

At the time of arrival of the SLS core at Stennis, ever zealously overconfident NASA and Boeing officials talked about the Green Run like it was a small, moderately inconvenient hurdle set in front of their flawless SLS rocket.  A Boeing official estimated that the rocket would complete the test campaign and be ready to ship to Kennedy Space Center by the middle of last year!

Of course, that didn't happen.  A full year of apparently unanticipated issues with the vehicle led to January's static fire test that ended with an aborted test 62 seconds into a planned eight minute firing, about 13% of the desired run.  After an embarrassingly long time before they announced they would actually insist on a re-test, NASA and Boeing discovered an engine valve issue for the second time (the first was last November), requiring at least another 4-6 weeks to repair. That valve was fixed on March 3rd, setting up a second static fire attempt no earlier than March 16th. 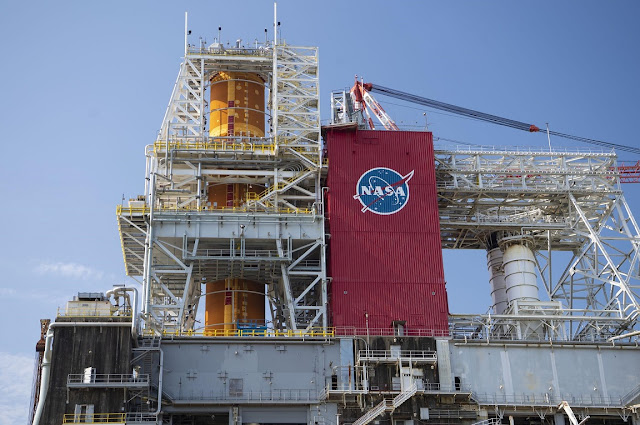